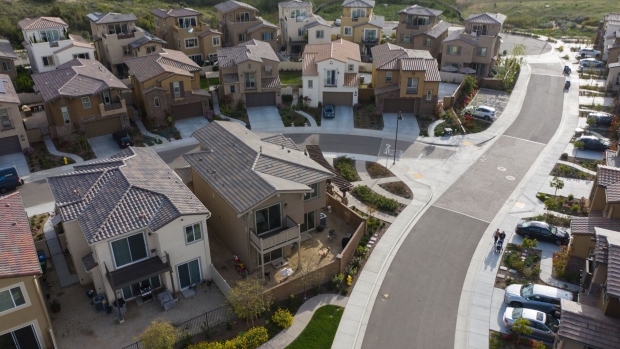 New townhomes under construction in The Preserve development by Cornerstone Communities Corp. in Carlsbad, California, U.S. on Wednesday, April 14, 2021. The U.S. Census Bureau is scheduled to release housing starts figures on April 16. , Bloomberg

Mortgage rates have stormed higher against a backdrop of the fastest inflation in four decades and prospects the Federal Reserve will tighten monetary policy more aggressively. The average 30-year fixed mortgage rate last week hit 5%, up from 3.11% at the end of 2021, according to Freddie Mac data.

Read more: KB Home may have better things to do than build more homes

Despite lean inventory, efforts by builders to boost production have been hindered by supply-chain challenges, soaring materials costs and difficult hiring conditions.

The NAHB’s measure of current sales dropped two points to 85, the lowest since September. A gauge of prospective buyer traffic decreased 6 points to an eight-month low of 60. Sales expectations for the next six months improved after dropping in March to the weakest reading since mid-2020.

By region, builder sentiment slid in the Midwest and West.