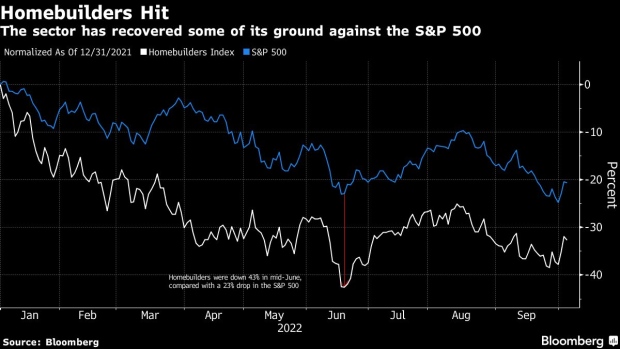 Contractors work on homes under construction in Antioch, California, US, on Tuesday, June 14, 2022. The number of home sellers lowering prices has reached the highest level since October 2019, the latest sign that the housing market is slowing from its once-frenzied pandemic pace. , Bloomberg

(Bloomberg) -- The prospect of declines in home prices as mortgage rates soar is hitting homebuilding stocks hard. Whether the low valuations present opportunities for investors, however, depends on what happens to the housing market.

Many of the companies are trading below their book values, and the group is “baking in a tremendous amount of bad news,” UBS Securities analyst John Lovallo said in an interview.

The S&P Supercomposite Homebuilding Index was down 43% through mid-June due to surging mortgage rates as the Federal Reserve kicked off a tightening cycle to tame inflation. The gauge has rebounded 18% since then, and it was essentially flat for the third quarter. The sector outperformed the broader market’s slump on Thursday, gaining 0.9% as Toll Brothers Inc. and M.D.C. Holdings Inc. led to the upside.

Home prices ticked lower month-over-month in July for the first time in a decade, according to S&P Corelogic Case-Shiller index data, after they surged during the pandemic. Mortgage rates, which last week hit the highest level since 2007, according to Freddie Mac data, eased slightly to 6.66% in Thursday’s reading.

A key disagreement between bulls and bears is how far home prices will fall, Evercore ISI analyst Stephen Kim said in an interview. “This is really about looking at home prices and saying ‘are they going to bend, or are they going to break?’” He has an overweight rating on all the homebuilders in his coverage.

With many of the stocks trading below book value, the firms “appear to be discounting a scenario where home prices fall 20-25%, because this is the amount of price reduction that would cause the builders to take large impairments to their land holdings and drive down book value,” Kim wrote in a report earlier this week. He doesn’t expect such a downturn because of a dearth of housing inventory in the US.

Meanwhile, Keybanc Capital Markets analyst Kenneth Zener recently upgraded his rating on the sector, lifting it to overweight from underweight on a quantitative approach. In observing past Fed tightening cycles, he said homebuilders experience “early pain” but then are among sectors to see an “early gain” as the cycle runs its course.

Zener’s recommendations have produced the best total returns across at least four of the builders over the past year, according to data compiled by Bloomberg. He isn’t calling for a bottom in the stocks, but instead expects a positive relative performance compared with the S&P 500 Index.

When the sub-index of builders’ stocks hit its lowest level of the year in June, it had fallen almost twice as much as the S&P 500 had at that point, even as the broader benchmark hit bear territory. As of Thursday’s close, it had narrowed the gap to about 11 percentage points.

Going into earnings season, investors are bracing for orders to be “pretty bad,” Lovallo said, with attention focused on the firms’ gross margins. Though he said sometimes cuts to estimates can draw positive market reactions when seen as a “clearing event.” The industry could also get a boost from a “hope trade” ahead of the spring selling season, Lovallo said. November has historically been one of the best months for the group.

“We’re constructive and believe that once we get some settling in rates, these stocks could work,” Lovallo said. “Until then it’s going to be bumpy.”

(Updates to market close in text and charts throughout.)