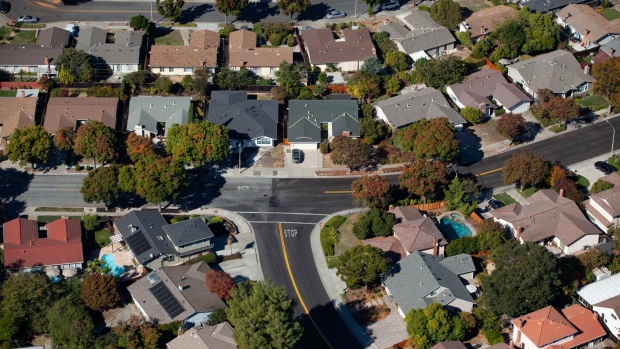 Houses stand in this aerial photograph taken near Cupertino, California, U.S., on Wednesday, Oct. 23, 2019. Facebook Inc. is following other tech titans like Microsoft Corp. and Google, pledging to use its deep pockets to ease the affordable housing shortage in West Coast cities. The social media giant said that it would commit $1 billion over the next decade to address the crisis in the San Francisco Bay Area. Photographer: Sam Hall/Bloomberg , Bloomberg

(Bloomberg) -- Real estate-technology company HomeLight has appointed Sean Aggarwal, the chairman of Lyft Inc. and former chief financial officer of Trulia, to its board.

“Sean understands real estate, the dynamic of the public equity markets, as well as the financial rigor required to take a company public,” HomeLight Chief Executive Officer Drew Uher said in an interview. He was introduced to Aggarwal through one of the company’s investors, Oren Zeev.

The San Francisco-based company, which provides technology used by real estate agents, buyers and sellers, is weighing options for going public, according to a person with knowledge of the matter. It was last valued at $498 million, according to PitchBook data, though a public markets debut is expected to value HomeLight at a sizable premium, the person said.

A HomeLight spokeswoman declined to comment on the company’s plans for going public and its valuation.

“This is one of the hottest sellers’ markets we’ve seen as people reassess what home means to them,” Uher said. “We’re unlocking transactions that otherwise wouldn’t occur.”

The company provides funding to buyers who haven’t yet been able to sell their current home, and to those who need the money to make a cash-only offer on a residence. Uher said annual revenue is set to triple to more than $300 million this year.

“HomeLight is building the future of real estate -- and is in a perfect position to revolutionize the industry,” Aggarwal said in an emailed statement.