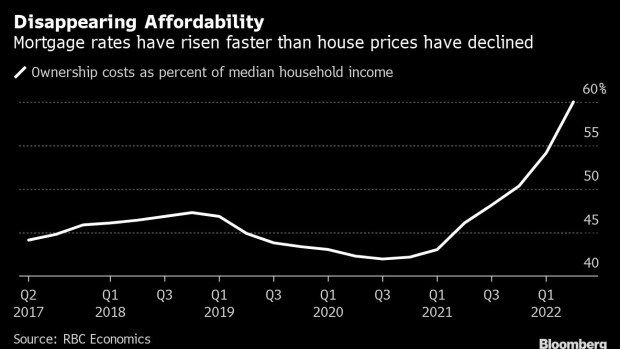 A home for sale in North Vancouver, British Columbia, Canada, on Tuesday, Sept. 13, 2022. Already, frothy markets such as Australia and Canada are facing double-digit house-price declines, and economists believe the worldwide downswing is only getting started. , Bloomberg

(Bloomberg) -- It’s never been harder for Canadians to buy a home, as soaring mortgage costs have more than offset the benefits of lower prices, according to Royal Bank of Canada.

Higher interest rates imposed by the Bank of Canada this year have pushed the cost of home ownership to record levels compared to the median household income, RBC economists said in a report Thursday. That means total ownership costs, including mortgage payments, now soak up 60% of a typical household’s income, higher than the previous record of 57% reached in April 1990.

“The Bank of Canada’s rate-hiking campaign since March has added hundreds of dollars to mortgage payments that come with a home purchase,” RBC economist Robert Hogue wrote. “This, along with the jump in property values during the pandemic, have made it more difficult than ever to become a homeowner in Canada.”

With inflation still at 7%, the central bank has indicated it’s not done increasing its policy rate, which has gone from 0.25% to 3.25%. RBC expects it to rise another three-quarters of a percentage point this year.

While the sharp increase in rates has caused national home prices to decline for six straight months, the benchmark home price is still up 44% in the past three years, according to the Canadian Real Estate Association. It was C$777,200 ($565,800) in August.

“The sharp housing market correction that began this spring is rolling back some of the spectacular price gains made during the pandemic,” Hogue wrote in his report. “This should help lower ownership costs next year. But the likelihood of further rate hikes from the Bank of Canada is poised to intensify affordability pressures before then.”

So far, Canada’s benchmark home price has fallen 7.4% since its February peak, but RBC expects those declines to come to 14% before they’re over next spring.