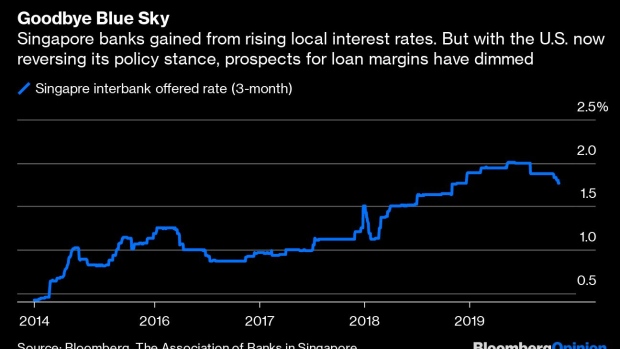 (Bloomberg Opinion) -- If their latest earnings are any guide, Singapore banks will be lucky to muddle through 2020 and use the lull in traditional business to extend their tentacles into fast-growing digital commerce. Worryingly for them, British, American and Japanese lenders — as well as Chinese fintech — have similar plans for the Singaporeans’ backyard in Southeast Asia.

DBS Group Holdings Ltd., the largest of the three homegrown lenders, reported Monday a better-than-expected 15% jump in net income to S$1.63 billion ($1.2 billion) in the September quarter. However, its net interest margin eased by one basis point to 1.9% from the previous three months. CEO Piyush Gupta expects the margin to shrink by about 7 basis points next year.

It’s a double whammy. Singapore’s economy, slowing sharply because of the U.S.-China trade war and attendant supply-chain dislocations in Asia, is threatening to push up bad loans. While DBS kept its nonperforming loan ratio stable at 1.5%, it did so by aggressively writing off soured assets. New bad loans rose almost 58% from a year earlier. There will be more credit-risk-related costs, just as interest-rate risks become unfavorable, a situation no bank likes.

All this will bolster their resolve to go digital. On offer is Southeast Asia’s  $100 billion-a-year internet economy, which is expected to triple by 2025. DBS has worked the hardest on third-party application interfaces. But Citigroup Inc. has built $500-million-plus annual revenue streams in Singapore, Indonesia, the Philippines, Thailand and Malaysia. The U.S. bank is using its balance sheet and expertise in transactions banking to push into regional digital deals. British lender Standard Chartered Plc, looking better than at any time in the past five years, has earned digital chops in Africa and is seeking to flex its virtual banking muscles in Hong Kong soon.

HSBC Group Plc is late to the party, but it, too, will eventually try to mitigate the risk from overexposure to the restive Hong Kong economy by pivoting to Singapore and Southeast Asia. Meanwhile, the Japanese will want to deploy their ultra-low-cost funding at home to profitable lending overseas. The likes of Mitsubishi UFJ Financial Group Inc. are in the game in Indonesia, the region’s largest economy and the biggest digital-consumption opportunity.

Then there’s JPMorgan Chase & Co., the biggest tech investor on Wall Street, earmarking part of its outsize capital spending to blockchain. The Monetary Authority of Singapore announced Monday a token-based prototype for multicurrency payment it has developed in collaboration with JPMorgan and Temasek Holdings Pte, the island nation’s investment firm. With Chinese President Xi Jinping announcing a “blockchain+” national strategy, there will be deep changes in Asia in the way flows of goods and assets are recorded in ledgers and financed.

To stay relevant, Singapore banks will have to invest more in tech. And they will have to do it amid ho-hum prospects for the one asset they dominate: local property. A 16-month downturn in mortgages might start to fade as interest rates become more affordable. But that’s about all banks can expect. The government may not want another cheap-money-fueled property bubble. Tight curbs on immigration and high taxes on residential real estate are expected to stay in place, at least until the next general elections due by 2021.

The banking market itself will become more contested with the arrival of online-only banks. In the mid-2000s, Citi won greater access to local savings thanks to the U.S.-Singapore free trade agreement. Now, Singapore is throwing open the local banking market for the sake of the city-state’s own competitiveness. Expect the Chinese fintech trinity of Baidu Inc., Alibaba Group Holding Ltd. and Tencent Holdings Ltd. to show deep interest.

No, 2020 won’t be a banner year for Singaporean lenders. Lower-for-longer global interest rates will hurt, though if they sit down and do their digital homework, the pain will be considerably less.