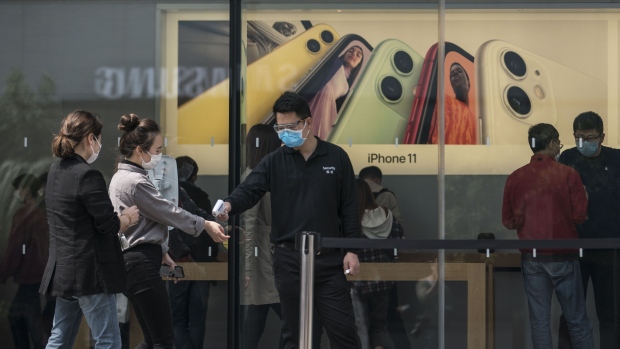 An employee wearing a protective mask checks the temperature of customers outside an Apple Inc. store in Shanghai, China, on Monday, April 20, 2020. Chinese banks lowered borrowing costs and the government promised to sell another 1 trillion yuan ($141.3 billion) in bonds to pay for stimulus spending after the economy had its first contraction in decades due to the coronavirus outbreak. , Bloomberg

The Taiwanese company posted net income of NT$22.9 billion ($778 million) for the quarter ended in June, compared with the average analyst estimate of NT$18.1 billion. Revenue was NT$1.13 trillion, down 2.8% from the year ago period, according to Bloomberg News’ calculations based on previously reported monthly sales figures.

Hon Hai is bouncing back from a record profit slump in the first quarter as production at its factories recovered and shelter-in-place orders spurred demand for home computing equipment. The pandemic likely boosted iPad and Mac sales, even as Apple store closures weighed on iPhone sales, Apple CEO Tim Cook said on July 31 after reporting quarterly revenue that crushed estimates. Apple accounts for half of Hon Hai’s sales.

Even as Apple outperformed, Hon Hai’s other customers have fared less well. Hong Kong-listed subsidiary FIH Mobile Ltd. said in its Aug. 7 earnings release that while Huawei Technologies Co.’s new phones have been popular in China, they missed expectations elsewhere following U.S. sanctions. Another key customer Xiaomi Corp. suffered a backlash in the Indian market amid growing tensions between China and the South Asian country. FIH lost $100 million in the first half.

Foxconn has been shaking up its traditionally China-centric operations. Hon Hai is among Apple assembly partners that plan to expand operations in India, potentially helping the iPhone maker grow its presence in the country of 1.3 billion and shift some of the U.S. company’s supply chain outside of China as ties between Washington and Beijing worsen.