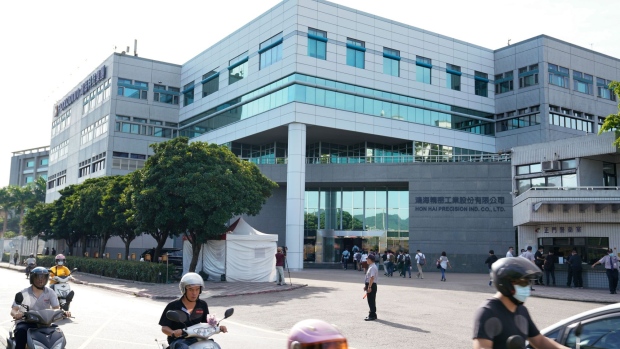 Revenue in the three months through March rose to NT$1.34 trillion ($47 billion), the Taiwanese manufacturer reported Tuesday, in line with the average analyst estimate. Sales in March climbed to NT$441.2 billion.

However, Hon Hai warned in late March that component shortages could persist until 2022 and affect under a tenth of its shipments, amplifying concerns that a global chip crunch could extend well beyond this year.

Shares of Hon Hai gained 57% over the past six months as the company announced its ambitions to venture into the electric-vehicle business, inking manufacturing deals with partners such as Byton Ltd. and Fisker Inc.

Annual shipments of Hon Hai’s EVs may reach 1.1 million units, or around 10% of global share, by 2025, Morgan Stanley estimated in March. Its auto businesses could generate $35 billion in revenue by that year, according to analysts including Sharon Shih.