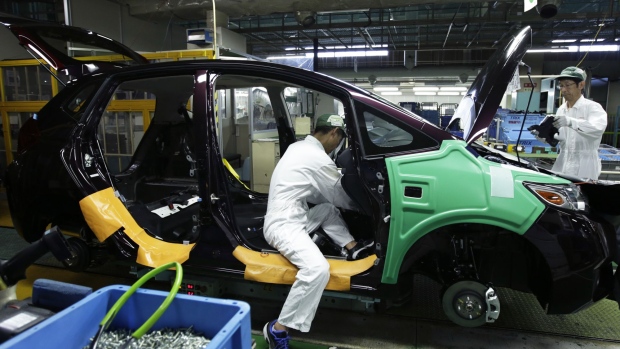 Workers assemble a Honda Motor Co. North America-bound Fit vehicle on the production line at the company's Suzuka factory in Suzuka, Mie, Japan, on Tuesday, Aug. 23, 2016. Attracting the best information technologists is becoming increasingly important for Honda Motor Co. and other carmakers as they seek a bigger share of revenue from IT-driven services such as ride-sharing and cloud-based monitoring of vehicles. , Bloomberg

(Bloomberg) -- Honda Motor Co. and Hitachi Ltd. are discussing a merger of four of their car parts businesses to create a components supplier with almost $17 billion in sales, joining the wave of partnerships sweeping across the global auto industry.

Shares of the parts makers soared after Honda, Japan’s second-biggest carmaker, said it would make a decision on the deal Wednesday. Hitachi said it will discuss the matter at a board meeting. The units to be combined include Hitachi Automotive Systems and Honda affiliates Keihin Corp., Showa Corp. and Nissin Kogyo Co., the Yomiuri newspaper reported earlier.

Faced with tectonic shifts such as electric vehicles and autonomous driving, automakers and their suppliers have been seeking allies to pool resources and know-how. Overnight, news broke that Fiat Chrysler Automobiles NV and French carmaker PSA Groupare were exploring a combination, and last month Toyota boosted its stake in Subaru Corp. Slumping demand for conventional vehicles and uncertainty over which technologies and business will prevail is forcing them to partner at a faster pace, according to Tatsuo Yoshida, an analyst at Bloomberg Intelligence.

“Honda and its affiliates have been slower to make moves compared with the Toyota group, so this will help them to catch up,” Yoshida said. “Automakers cannot wait any longer to develop technologies in new fields.”

Keihin shares jumped 21%, the daily limit and their most on record. The manufacturer supplies electrification systems for hybrid and electric vehicles along with valves and controls for fuel cell vehicles. It also makes conventional engine components including management systems for natural gas vehicles.

Showa manufactures differential gears, shafts and other drivetrain components along with shock absorbers and steering systems. It’s stock surged 19% and Nissin Kogyo, which makes brakes and engine mounts, soared 20% by midday in Tokyo.

“There might be more mergers among auto component makers seeking scale,” said Koji Endo, an analyst at SBI Securities. “Small auto part makers could merge together, or big manufacturers could actively buy small ones. Clearly we will see such moves in Japan and elsewhere in the world.”

The four-company combination would create a parts maker with about 1.8 trillion yen ($16.5 billion) in sales, compared with Japan-based Denso Corp., a Toyota affiliate that had sales of 5.3 trillion yen in the year ended March and Aisin Seiki Co., which had about 4 trillion yen.

Hitachi Automotive Systems had sales of 971 billion yen in the year ended March, while Keihin, Nissin Kogyo and Showa combined had about 825.6 billion yen.

The parent Hitachi, which makes everything from nuclear power equipment to telecommunications gear and construction machinery, counted on automotive systems for about 19% of earnings last fiscal year. The conglomerate been selling off and merging non-core units as it focuses on growth from information technology systems.

Nissin Kogyo and Showa count on Honda for more than half of their revenue, while also supplying carmakers including Suzuki Motor Corp., Mazda Motor Corp. and Subaru Corp., according to data compiled by Bloomberg. Keihin is more dependent on its affiliate, relying on Honda for 85% of sales, while also supplying some to Volkswagen AG, Ford Motor Co. and Daimler AG, the data show.

Both Honda and Toyota have cut their profit and sales forecasts for the current fiscal year as demand in the U.S. and China, the two biggest export markets, has been worse than projected.

To contact the editors responsible for this story: Young-Sam Cho at ycho2@bloomberg.net, ;Sam Nagarajan at samnagarajan@bloomberg.net, Dave McCombs, Reed Stevenson