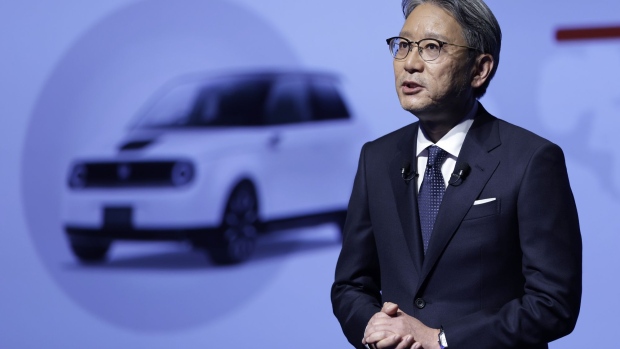 Toshihiro Mibe, president and chief executive officer of Honda Motor Co., speaks during a news conference in Tokyo, Japan, on Friday, April 23, 2021. Honda Motor plans to increase its electric-vehicle sales in the coming years with a target of reaching 100% by 2040. , Bloomberg

Honda Motor Co. set what it called a challenging target for all of its sales to be electric vehicles by 2040 as it tries to keep up with the global EV race and revive profits under the new leadership of Toshihiro Mibe.

The Japanese company also said it will invest about 5 trillion yen (US$46 billion) in research and development over the next six years, “regardless of fluctuations in our sales revenue.”

Automakers around the globe are rushing into the EV sector as the industry shifts to electrification and self-driving cars. Among them, Jaguar Land Rover has vowed to go fully electric by 2025, and Volvo by 2030. Japanese Prime Minister Yoshihide Suga pledged to cut greenhouse gas emissions by 46 per cent by 2030 from 2013 ahead of the global climate summit hosted by U.S. President Joe Biden.

“It will be an uphill struggle,” Mibe said at a news briefing Friday, noting that Honda’s EV sales are less than 1 per cent of its total in Japan. “It’ll be about how early we can build a structure that lets us make profits.”

Toyota Motor Corp. has been able to assuage investors’ concerns on EVs with the introduction of its “bZ4X,” but Honda may not be able to do so just by declaring targets, said Tatsuo Yoshida, an analyst at Bloomberg Intelligence. “I wish they had more concrete plans,” he said.