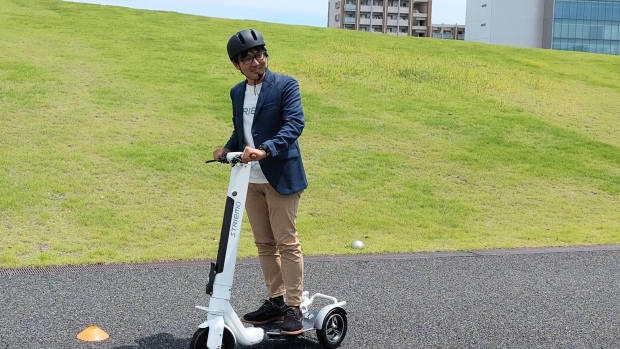 Are electric scooters a crucial technology for combating urban congestion and climate change?

Or are the two-and-three-wheeled vehicles a blight on the urban landscape — better known for their tendency to cause accidents, break down and be abandoned, eventually ending up strewn across parks and sidewalks in a sort of “scootergeddon” scenario, as some call it.

That’s what I was asking myself when, at a venue outside Tokyo a few weeks ago, I tested a new e-scooter developed by a Honda venture.

The idea behind micro-mobility options such as electric bikes and scooters is for city dwellers to use them in place of cars to travel short distances. Hopping on an electric bike or scooter to commute to work, for example, reduces traffic congestion and cuts back on fumes.

Indeed, choosing a micro-mobility option over a car for just one trip a day reduces an average urban dweller’s carbon footprint by half a ton over the span of a year, according to a University of Oxford study.

Those benefits have generated a lot of hype around the future of e-scooters — and their manufacturers. Though its shares have taken a beating over the past six months, US-based scooter startup Bird was one of the fastest startups ever to reach a $1 billion valuation.

At the same time, micro-mobility options on the streets today have their fair share of issues. For one, some of them are flimsy. A 2018 study found the average lifespan of a Bird scooter on the streets of Louisville, Kentucky, was less than a month (Bird disputes the finding.)

And scooter-related accidents and injuries are common. Unstable designs, coupled with unpredictable street conditions and inexperienced riders, make the lightweight vehicles hard to maneuver. One study showed e-scooters sport an injury rate 175 to 200 times that of overall vehicle travel.

Carved out of Honda’s business-creation program, the startup has developed an e-scooter that’s hyper-focused on safety. The three-wheeler, which can get about 30 kilometers per charge, is fitted with a self-balancing mechanism developed by a long-time Honda engineer.

I can attest that Striemo’s scooter felt much steadier than others I’ve ridden. At Honda’s research center, I was able to steer through some tight cones and steep drop-offs without wiping out in front of the assembled body of Tokyo’s auto journalists.

Yotaro Mori, Striemo’s co-founder and CEO, said he was inspired to create the scooter after unsatisfactory experiences testing out similar products overseas.

“I thought with my tools and background I could create something better,” Mori said at the test event. Before founding Striemo, Mori was an engineer at Honda, where he spent more than a decade working on motorcycle research and development.

Mori said that he spent years of after-work hours designing a three-wheeler concept, tinkering with a system that stabilizes the vehicle by measuring its center of gravity to one-tenth of a millimeter.

Today, Striemo is taking orders for around 300 scooters that will initially be released to consumers in Japan. Mori aims to build from there —expanding into Europe in 2023 and then targeting a global rollout.

For now, there are bullish forecasts for the future of electric micro-mobility. McKinsey expects the market to reach $500 billion by 2030, and BloombergNEF sees potential for modal shifts to help hasten the world’s push to achieve on-road carbon neutrality.

Whether or not electric bikes, trikes, scooters and mopeds will live up to those expectations is still unclear. But as it begins to spread globally, Striemo and its safety-oriented invention could be a piece of that puzzle.