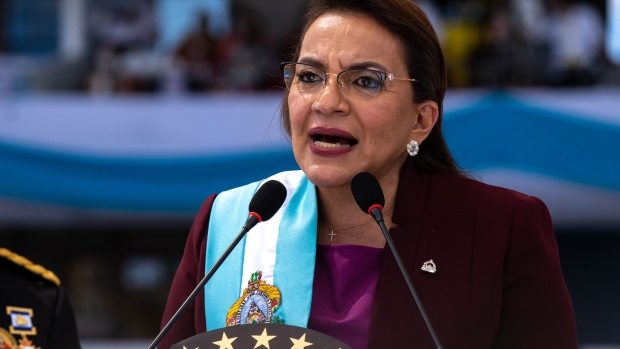 Xiomara Castro, Honduras' president, speaks during an inauguration ceremony at the National Stadium in Tegucigalpa, Honduras, on Thursday, Jan. 27, 2022. Honduras' incoming president said the nation needs a comprehensive restructuring of its unsustainable debt, prompting a drop in bond prices. , Bloomberg

(Bloomberg) -- Honduras’s new government will seek to refinance, not restructure its debt as President Xiomara Castro said in her inaugural address, according to the government’s new minister of economic development.

Castro’s comments triggered a selloff in the nation’s bonds Thursday when she pledged to launch a “comprehensive restructuring” of $13 billion in gross government debt she said is “thunderous and suffocating.”

“It’s a re-profiling,” Pedro Barquero said in a written response to questions, clarifying Castro’s comments. “We have to better manage our liabilities, but all obligations will be met.”

He said the government would look to refinance internal and external debt, “issuing bonds with longer maturities once current ones come due.” He said they won’t refinance multilateral loans.

“Unfortunately the previous government didn’t provide us with all the information, so right now we just have ideas,” Barquero said. “Tomorrow we will look at the details and be able to define a better path forward, but we are never going to stop paying.”