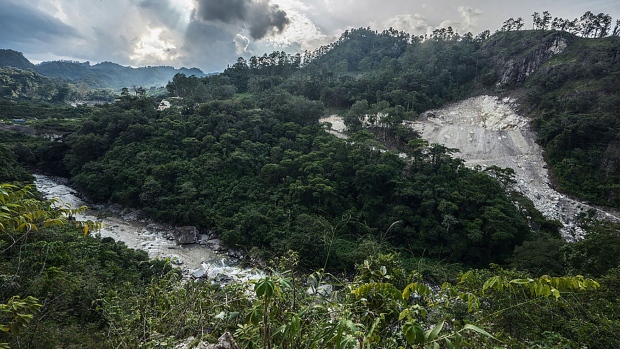 The Gualcarque River, downstream from the Aqua Zarca Dam. Sandwiched between Guatemala and Nicaragua on the Caribbean coast, Honduras is blanketed in forest and rich in valuable minerals. But the proceeds of this natural wealth are enjoyed by a very small section of society. Honduras has the highest levels of inequality in the whole of Latin America, with around six out of ten households in rural areas living in extreme poverty, on less than US$2.50 per day. A recent report documents shocking levels of violence and intimidation suffered by rural communities for taking a stand against the imposition of dams, mines, logging, or agriculture on their land - projects that are controlled by rich and powerful elites, among them members of the political class. The root causes of the abuses are widespread corruption and the failure to properly consult those affected by these projects , Photographer: Giles Clarke/Getty Images South America

(Bloomberg) -- Honduras plans to follow Gabon in attempting to issue a new form of carbon credit that they say has the potential to help countries get the funds they need to protect their natural assets.

Honduras plans to convert  REDD+ units, created within a UN framework to incentivize forest protection, into sovereign carbon credits to raise money from countries and corporations keen to cut their CO2 footprints

The Central American country, which is 48% covered by forest, plans to sell securities based on the emissions its forests absorb and has already submitted to the mechanism. It will start a review in January, with the aim of submitting at least 5.5 million more to REDD+. The idea is to turn these into carbon credits, Malcolm Stufkens, the country’s vice minister for environment, said.

The plan comes as nations across the world’s tropical forest belt, from Colombia to Indonesia, look to monetize their extensive tree cover while at the same time protecting it. Each credit represents a ton of carbon dioxide emissions removed from, or not added to, the atmosphere.

“Why is there is no recognition for the standing forest?” Stufkens said in an interview at the COP27 international climate summit last week. “That’s what we’re fighting for.”

REDD+ is a voluntary framework created in 2013 under the auspices of the UN Framework Convention on Climate Change. There’s controversy about the value of the units and whether they can be turned into carbon credits. The REDD+ mechanism wasn’t set up to create carbon credits and the assessment process lacks the appropriate checks and balances. While there is an independent verification process, the results can’t be rejected by UNFCCC experts and the onus is on the buyer to do their own due diligence.

There’s also debate about whether carbon credits can be generated from securities that represent the value of standing forests rather than as a reward for reducing or reversing deforestation.

Earlier this year the central African nation of Gabon, which houses a chunk of the Congo Basin forest, said it would attempt to sell 90 million of its REDD+ units on the voluntary carbon market. Stufkens said Honduras will follow suit.

“We are working toward the sovereign credits,” he said. “Honduras hasn’t sold until the moment, but we are ready to push out into the market credits generated pre-2020, and we are working on the presentation of the new units in 2021-2022.”

Stufkens said the country will aim to market the products as Internationally Transferred Mitigation Outcomes, or ITMOs, under the general UN carbon market rules agreed at COP26 in Glasgow last year, the details of which are yet to be fully ironed out.

The Coalition for Rainforest Nations, of which Honduras is a member, said the units from Honduras, together with 7.7 million from Belize, will likely be issued in the first quarter of next year and will be based on reduced emissions. Papua New Guinea is expected to issue more than 90 million of the units with the same aim later that year, the CfRN said.

Gabon’s Environment Minister, Lee White, has said that the country expects to sell the credits for between $25 and $35 each. Stufkens said Honduras wants “a fair price,” declining to elaborate further.