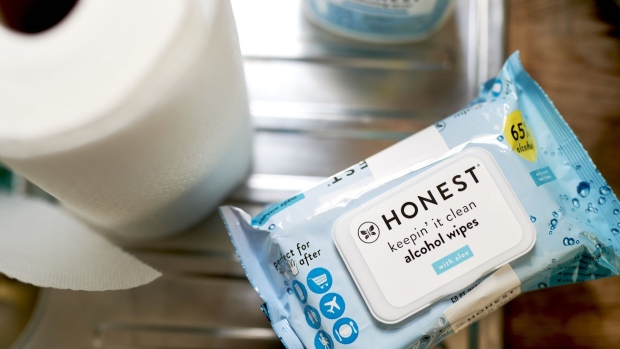 (Bloomberg) -- Honest Co., the personal-care company founded by actress Jessica Alba, posted quarterly results that missed analysts’ estimates and projected a tough 2022, a disappointment for investors whose shares have fallen more than 60% from the initial public offering last May.

The loss for the fourth quarter was 10 cents a share, Honest Co. said Thursday, wider than the 6.1-cent average of analysts’ estimates. Sales rose 3.2% to $80.4 million, but missed the $84.5 million average of estimates. Honest Co. predicted losses excluding some items for the current quarter and year, compared with Wall Street forecasts for profit.

With the pandemic easing, sales of cleaning products slumped 68% in the fourth quarter, the company said, and led to a writedown of inventory. That’s added to challenges that include inflation and supply-chain bottlenecks.

The drop in demand for product “around disinfecting as well as sanitization is not what we expected,” Chief Executive Officer Nick Vlahos said in an interview.

Shares of Honest Co. fell as much as 21% to $4.75 in extended trading after the results were announced. The stock went public in May of last year at $16 a share. It closed at $6.04 Thursday in New York.

The decline in those businesses tempered double-digit gains in Honest Co.’s baby and personal-care products, which account for the bulk of its business. Honest Co. recorded a $3.2 million writedown because of the household products, contributing to the earnings shortfall.

For the current quarter, Honest Co. is forecasting a loss of $10 million before interest, taxes, depreciation and amortization, compared with a $1.34 million profit seen by analysts, with sales down 15%.

For the year, the company projects a loss of $5 million to $10 million on that same basis, below the $5.68 million in earnings seen by Wall Street. Sales should grow at a mid-single digit clip after the first three months of 2022.

Honest will emphasize the wellness side of its business as the household segment struggles, according to Vlahos. The company is set to launch new supplements targeting sleep and immunity, as well as a product line with health and nutrition store GNC Holdings Inc.

With reopenings encouraging more of its customers to shop in stores, Honest also plans to offer its goods at brick-and-mortar Ulta Beauty Inc. locations as well as Walmart Inc.

Gross margins should improve as the company implements mid-single-digit price increases across about two-thirds of its portfolio to offset inflation. The first round took effect Jan. 1, Vlahos said, with a second one coming around the second quarter.