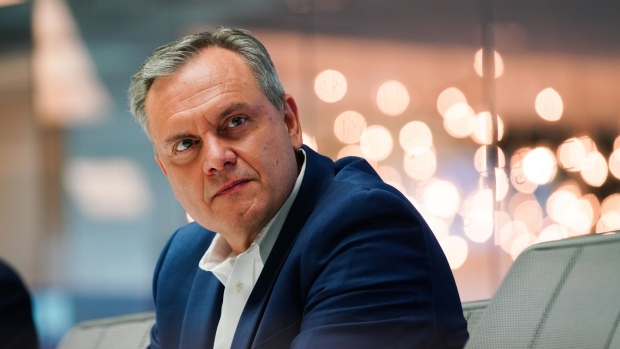 Darius Adamczyk during an interview in New York, on Aug. 4. , Bloomberg

(Bloomberg) -- Honeywell International Inc. boss Darius Adamczyk is puzzled by all the chatter about how rising inflation rates are temporary.

“I’m not seeing it,” the 55-year-old chief executive officer said in an interview. “I’m seeing quite a bit of pressure on both.”

While Adamczyk declined to take a stand on whether accelerating inflation is short-lived or more permanent, he said he’s seen strong demand and scant supply across Honeywell’s businesses for copper, plastic resins and semiconductors. That’s keeping Honeywell from making everything it could sell.

The Charlotte, North Carolina-based company makes an array of products -- chemicals, jet engines, safety and gas-detection equipment, factory-automation machinery and natural-gas processing systems, to name a few. And with operations in more 100 countries, it has broad exposure to labor and supply-chain constraints.

Honeywell has raised wages more than 10% to keep factories staffed, redesigned products to use more widely available chips, consolidated supply purchases at the corporate level to gain bargaining power and extended purchase commitments to a year instead of the usual three months to guarantee it can get components.

Still, the supply-chain crunch reduced sales by about $200 million in the second quarter. Had Honeywell not responded as it did, the damage could have reached $500 million, Adamczyk said in the interview, held at Bloomberg’s headquarters in New York.

“The business environment continues to be robust,” he said, so the potential for more lost sales could grow. “It all depends on when we can liberate a little bit more supply.”

The global economy’s ability to boost output and ease the supply crunch is hobbled by uneven recoveries from the Covid-19 pandemic.

China was one of the first countries to rebound and now faces some “hiccups,” said Adamczyk, who’s in his fourth year on the job. While the U.S., U.K, and Europe are on the road back, Latin America and Africa are in a tough slog. India is the next large economy that will begin to emerge from the ravages of the virus, he said.

“The world is still interlinked from an economic perspective,” he said. “I could see this kind of being a bit of a rolling challenge that happens for at least the next several quarters.”

Meanwhile, the savings rate in the U.S. has increased as people spent less on travel, movies and concerts while large stimulus packages and higher unemployment benefits lined their pockets. That points to continued strong demand for goods, he said.

Honeywell, like other companies, is trying to raise prices to offset higher costs for labor, materials and services such as freight transportation. Those higher wages will probably stick, since companies rarely reverse increased pay rates.

“If labor costs go up permanently, then we’re going to have to figure out how we sustain at least some level of that pricing power. Otherwise, we’re going to deteriorate margins,” he said.

Adamczyk has another big inflation-related concern: Decreased investment in oil and gas as focus turns toward alternative energy sources. The transition from traditional hydrocarbons needs to be thoughtful and gradual to avoid price spikes, he said.

“We could be actually in a world of hurt when it comes to hyper-inflation on energy costs because you’re going to get depletion on hydrocarbons and the new renewable technologies are not going to be ready yet,” he said. “That’s not a place that we want to be.”

Taking all those factors together, Adamczyk said inflationary pressures are likely to continue for some time.

“There’s a lot of views that say it’s temporary, or it’s transitory, or whatever word you want to use,” he said. “But I never hear the explanation as to why.”

In the hour-plus session at Bloomberg’s office, Adamczyk and other Honeywell executives also addressed vaccine mandates, the return of business travel, the M&A environment and other topics. Here’s a sample: