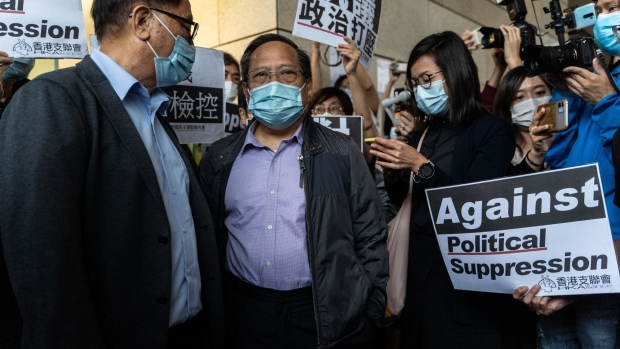 (Bloomberg) -- A Hong Kong court handed down fresh jail sentences to a group of democracy activists, including a former chief executive candidate and the ex-leader of city’s biggest protest group, over their roles in vigil to commemorate the 1989 crackdown in Tiananmen Square.

Albert Ho, a former lawmaker and Democratic Party chief who sought the city’s top job in 2012, was sentenced to 10 months in District Court on Wednesday for his participation in the unauthorized vigil last year. Ho was among a dozen activists who pleaded guilty last Thursday to charges related to the protest, with seven of them already serving jail time for other banned political activities.

Representatives from the consulates of the European Union, Sweden, and Australia attended the hearing before Judge Amanda Woodcock. Thousands of activists defied a police ban last year to go ahead with the candlelight vigil in Victoria Park, which drew massive crowds annually. Local democracy advocates have accused the authorities of invoking the pandemic restrictions against gatherings to curb the right to assembly and other freedoms guaranteed to the former British colony before its 1997 return to China.

Hong Kong authorities have in recent days arrested Ho and other involved in organizing the annual vigil on more serious national security charges, in what appears to be a crackdown on an enduring symbol of political dissent. On Thursday, the city’s national security police searched a museum dedicated to June 4, 1989, crackdown in Beijing.

Four other defendants in the vigil case, including former student activist Joshua Wong, were sentenced to jail in May for participating in the June 4 vigil. Eight more, including jailed media tycoon Jimmy Lai, vigil organizer Chow Hang Tung and Lee Cheuk-yan, have pleaded not guilty and will face trial in November.