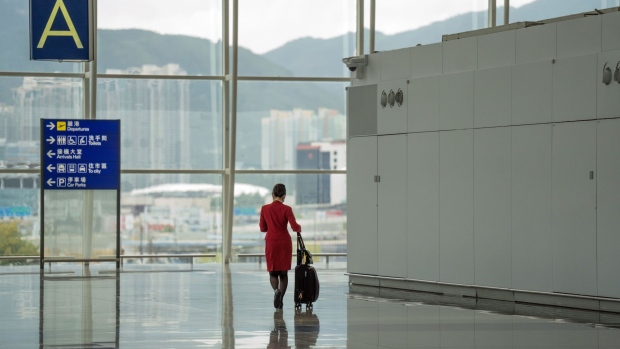 A flight attendant for Cathay Pacific Airways Ltd. at Hong Kong International Airport in Hong Kong, China, on Monday, Aug. 8, 2022. Hong Kong will reduce the period of time people entering the city must spend in hotel quarantine to three days from seven, a bolder-than-expected easing of its strict Covid-19 travel curbs, yet still leaving the Asian financial hub isolated in a world that’s mostly moved on from the pandemic. , Bloomberg

(Bloomberg) -- Hong Kong’s government has eased Covid-related restrictions on the movements of locally based crew when making overseas trips, on which the territory’s strict rules had previously confined them to their hotels.

From Tuesday onward, pilots and flight attendants no longer need to isolate in their hotel when overnighting between the outbound and return legs of foreign flights, Cathay Pacific Airways Ltd. said in a memo to staff obtained by Bloomberg. They’ll still be expected to avoid bars and other mass gatherings.

For those air crew whose flights return to Hong Kong without a layover, the rule relaxation also ends a requirement for them to wait at the airport for the result of coronavirus tests, though those who stayed the night must still do so.

The changes, which also apply to Hong Kong Airlines Ltd., Greater Bay Airlines Co. and Cathay’s low-cost affiliate HK Express, bring the rules for crews making overseas layovers into line with the removal of mandatory quarantine for employees arriving back in Hong Kong, a step that was also extended to passengers on Sept. 26.

The new rules should make it more attractive for pilots and flight attendants based in the Asian financial hub to resume flying more frequently, and will reduce enforced downtime after trips, making rostering more efficient.

They’ll also permit Hong Kong-based crew to live more normal lives, for example going to the restaurant on returning home, something which under the old regulations wasn’t permitted for three days.

Cathay’s Chief Operations and Service Delivery Officer, Greg Hughes, said the changes were a “significant milestone” toward normalizing the airline’s operations. But he noted they “fall short of the complete removal of such restrictions on our aircrew, which we still seek.”