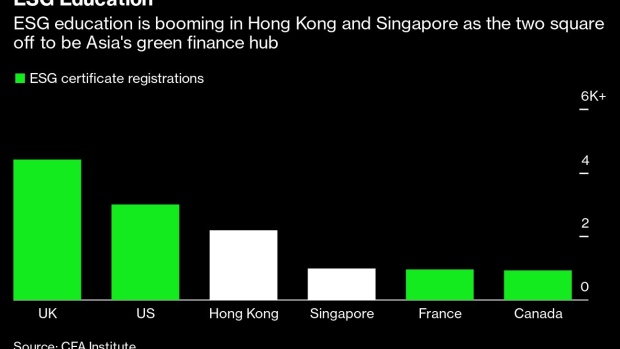 (Bloomberg) -- Hong Kong and Singapore have long squared off to be the preeminent finance hub for Asia. That battleground is now shifting to the ESG space, with potentially trillions of dollars at stake.

From green bonds to carbon trading and asset management, both cities are angling to be the regional base for sustainable finance as governments and companies ramp up investments to fight climate change. Combined ESG assets could soar to $53 trillion by 2025, with Asia sparking the next leg of growth, according to Bloomberg Intelligence.

The race to attract all that fresh money and trading business in Asia will take years to play out, but so far Singapore has an early edge over Hong Kong.

“Singapore knows that it might not be as established as Hong Kong as a financial hub, but in this area, if it manages to win, it will really be a game changer,” said Cherie Tam, senior manager in Hong Kong at Blunomy, a climate consulting firm.

As more firms look to expand ESG financing in Asia, here’s how the competition for environmental, social and governance business is shaping up.

There were 272 sustainability, green, social or transition bonds listed in Singapore as of Sept. 28, more than double the 103 listed in Hong Kong. Issuance linked to Hong Kong’s exchange totaled $24 billion, versus Singapore’s $34 billion. Singapore firms also hold an edge for green loans, with about $39.5 billion, nearly triple the $13.4 billion raised in Hong Kong.

As an issuer though, Hong Kong is well ahead, selling $7.2 billion in sovereign green bonds across different currencies since 2019 to establish a benchmark for corporate borrowers. Singapore only entered the green bond market in August with its debut sale of $1.7 billion in 50-year notes.

Hong Kong’s early adoption of a taxonomy that finds common ground between Europe and China will help the market grow, according to Elsa Pau, founder of BlueOnion Ltd., an ESG financial analytics firm. “Investors’ demand is still growing for a sustainable ecosystem and a decent yield,” she said.

Hong Kong is also poised to benefit from its proximity to China, the fastest-growing market for green bonds. Most of that issuance has been in the domestic market but as China looks to sell more abroad, the hub is “a natural listing place for them,” said Xuan Sheng Ou Yong, a green bonds and ESG analyst at BNP Paribas Asset Management.

Trading of carbon credits has the potential to reach $50 billion by 2030 as polluting companies seek to balance their emissions with offsets generated by tracts of forests in Indonesia, carbon capture technology and other CO2-mitigating strategies, according to McKinsey & Co.

Singapore has two fledgling bourses: AirCarbon and Climate Impact X, which has the backing of state investor Temasek Holdings Pte and the Singapore Stock Exchange. To date, CIX has sold 420,000 carbon credits via auction. AirCarbon, or ACX, which recently sold a 20% stake to the Abu Dhabi wealth fund, has seen more than 16 million carbon credits transacted.

Hong Kong just launched a voluntary trading platform on the stock exchange in October. The city may be slower off the mark, but could leverage China’s carbon market.

“There is absolutely a first mover’s advantage” though not a “foregone conclusion” on which hub is better placed, said Hannah Hauman, global head of carbon trading at Trafigura Group Pte.

For now, Hong Kong is the undisputed assets leader, based on data compiled by Bloomberg. There are 70 ESG funds run by managers based in Hong Kong, with total assets under management of $53.1 billion as of November. That’s five times the $11.3 billion across 26 funds run out of Singapore.

“When you look at ESG, you’re looking at a global talent pool,” he said, and Singapore has had a head start.

The Glasgow Financial Alliance for Net Zero is setting up its Asia base in the city-state, joining ESG-focused teams at firms like Deutsche Bank, abrdn plc, Schroders Plc and Robeco Institutional Asset Management NV.

Hong Kong’s reopening will lead to a rebalancing, according to Balfour. Wall Street giants like Goldman Sachs Group Inc. and Morgan Stanley have their sustainable research heads in Hong Kong. Asset managers BlackRock Inc. and Fidelity International are also there.

Universities and other education institutes in both cities are ramping up courses to deal with the acute need for ESG talent, creating one of the hottest job markets in financial services.

The CFA Institute is attracting more students in Hong Kong than Singapore for its ESG-focused programs. Hong Kong has had more than 2,200 registrations, versus more than 1,000 in Singapore.

The three main schools in Singapore offer certificates in sustainable finance for working professionals. Singapore Management University drew over 600 participants in the last academic year to its sustainable business and finance programs, while Nanyang Technological University had more than 100 students enrolled.

Regulators in both hubs have introduced ESG reporting for listed companies, along with anti-greenwashing rules for funds and climate disclosure for banks and asset managers.

Singapore’s listed companies are more transparent. More than 90% of firms prepared their ESG reports based on international standards like the Global Reporting Initiative, compared with 18% in Hong Kong, according to Sustainalytics. Half of Singapore’s firms got an external third party to verify their reports, compared with only 27% in Hong Kong.

Singapore is also making more progress on board diversity, with women making up 20% of board seats at the country’s 100 biggest listed companies as of January, compared with 17% for firms on Hong Kong’s main stock index. Both cities lag behind Asian peers including Japan and Korea when it comes to shareholder rights scores, according to Bloomberg Intelligence.

Which hub is literally greener? First-time visitors to both places are often struck by the amount of green space, once you venture beyond the office towers that crowd the business districts.

Hong Kong has the edge though, with more than two thirds of the city considered green space, even if much of it’s mountainous. Singapore trails with about 40% as its botanic gardens, reservoirs and pricey golf clubs barely offset the urban sprawl.

--With assistance from Jane Pong and Amine Haddaoui.