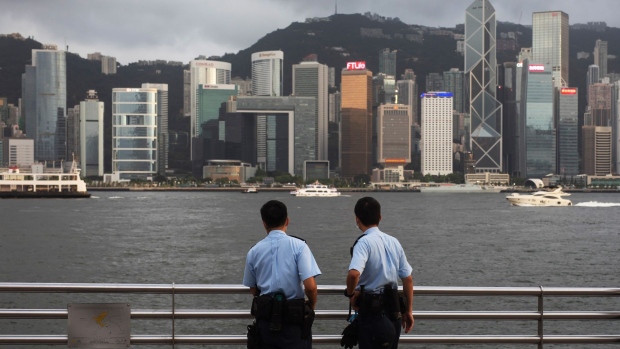 Police officers cordon off a section of a road near Victoria Park, assembly point for a now-banned protest, in the Causeway Bay area of Hong Kong, China, on Thursday, July 1, 2021. Hong Kong's leader pledged to press ahead with an unprecedented national security crackdown, as the Asian financial center marked a series of fraught anniversaries symbolizing Beijing’s tightening grip over local affairs. Photographer: Paul Yeung/Bloomberg , Bloomberg

Five members of the General Union of Hong Kong Speech Therapists, which has published books for children with political themes featuring cartoon sheep, were arrested by the police’s national security department, local media including Oriental Daily newspaper and Cable TV reported. The police said in a statement Thursday that they arrested two men and three women -- all in their 20s and members of a local trade union -- and froze union assets totaling HK$160,000 ($20,600).

“The arrested persons are suspected of conspiring to publish, distribute, display or reproduce publications from the middle of last year to this year, with the intention of causing hatred, incitement to violence and the abuse of law by the public, especially young children, against the Hong Kong government and the Hong Kong judiciary,” the police said.

The arrests come as authorities increasingly use laws, including a national security law enacted last year and a sedition law imposed during British rule, to jail members of the opposition. The police bureau created by the security law has used it to arrest at least 132 people, including activists, lawyers, journalists and academics. It has also arrested at least nine other people on allegations of seditious speech or publications.

While Hong Kong officials have said the security law targets only an “extremely small minority,” they have begun to use it to remove public library books and censor films. In June, the Hong Kong police raided the newsroom of the pro-democracy Apple Daily newspaper and arrested top editors on suspicion that they violated colluded with foreign forces to sanction China. The paper, whose assets were frozen by authorities, later shut down.

One book published by the union, “Twelve Warriors of the Sheep Village,” shows cartoon animals fleeing a group of wolves before being captured at sea and sent to prison. The scenario mirrors the case of Hong Kong activists caught by the Chinese coast guard while attempting to flee to Taiwan. And one of the last pages of the book features the real names of the dozen activists against sheep profile pictures.

In another book, a medical workers’ union that went on a high-profile strike early in the pandemic to pressure the government to shut the border with mainland China are also shown as sheep. Winnie Yu, the union’s leader, was one of 47 prominent activists accused of “conspiracy to commit subversion” over a primary election last year that authorities described as a plot to paralyze the government. She remains in jail ahead of her trial, since the security law greatly restricts the right to bail.