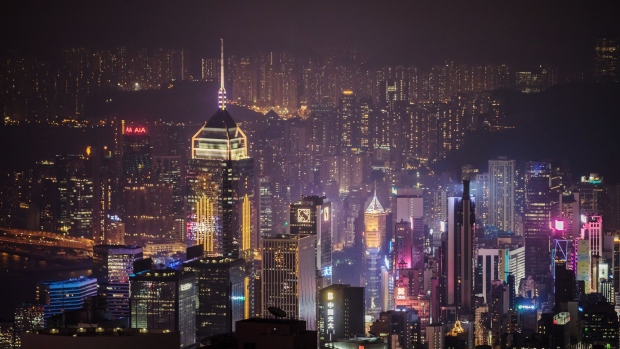 Buildings are seen from Victoria Peak at night in Hong Kong, China, on Wednesday, Aug. 28, 2019. Hong Kong's hotel industry is struggling with a collapse in bookings after thousands of protesters shut down flights from the territory's airport in an escalation of months of clashes with police. Photographer: Paul Yeung/Bloomberg , Bloomberg

Five men and one woman aged 23 to 50 were suspected of opening about 60 personal accounts at various banks in Hong Kong to launder money, the government said in a statement on its website. They were involved in over 2,600 transactions from January 2018 to February 2020, the statement said.

Hong Kong has been hit by a number of high-profile money laundering cases this year. The city’s police last month arrested 12 people for running alleged “ramp and dump” stock scams and money laundering after raids on luxury homes and brokerages across the city.

In January, the authorities arrested bank staff allegedly involved in HK$6.3 billion of dirty money flows over the past four years.

A report released last year by the International Consortium of Investigative Journalists based on leaked documents found that Hong Kong was among the biggest centers in Asia for suspicious money flows from 1999 to 2017.