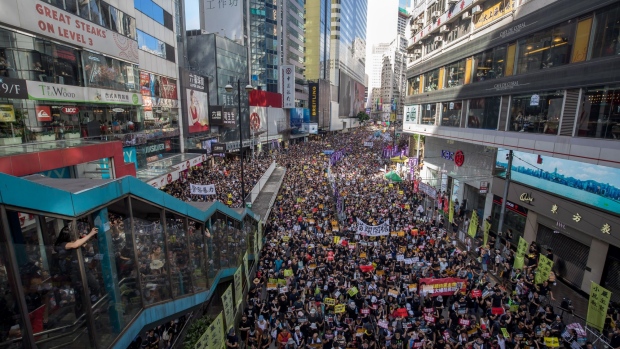 Protesters march during the annual pro-democracy rally in Hong Kong, China, on Monday, July 1, 2019. Tension returned to Hong Kong's streets Monday as protesters attempted to break into the city's legislature and thousands more gathered to march in opposition to the city's China-backed government. , Bloomberg

The Hong Kong Appeal Board on Public Meetings and Processions upheld a police ban on the march planned for the July 1 anniversary of Hong Kong’s return to Chinese rule, said Civil Human Rights Front co-convener Jimmy Sham. The group has organized some of the city’s largest-ever protests, including peaceful gatherings against extradition legislation last year that attracted more than a million people and helped lead to the proposal’s ultimate withdrawal.

Some activists urged supporters to turn out anyway to express displeasure with the security law, even though doing so meant risking arrest.

The decision was expected after police similarly issued an unprecedented ban on the annual candlelight June 4 vigil to mark the Chinese military crackdown on pro-democracy protesters in Tiananmen Square in 1989. Authorities appeared disinterested in alternatives presented by CHRF to avoid violating measures barring crowds of more than 50 from gathering, Sham had said after discussing proposals with police on June 23.

The bans have all but silenced mass protests in Hong Kong, just as top lawmakers in Beijing pushed through legislation that would criminalize among other things acts deemed separatist or subversive. Earlier Tuesday, Chinese President Xi Jinping signed an order promulgating the sweeping national security law, although key details remained secret.

The July 1 march has long been used as a gauge of public dissatisfaction with the city’s Beijing-backed government, drawing a record 550,000 people last year, according to CHRF. The event is held on the public holiday marking the U.K.’s departure in 1997 and the implementation of China’s promise to respect the city’s “high degree of autonomy” for at least 50 years.

Sham apologized for not being able to hold the march, adding that the group would wait until next week to announce future plans because “whether CHRF will still exist after the law is still unknown.” The group respected individuals’ plans to go ahead with the march, but CHRF will adhere to their commitment of holding legal, peaceful protests.

Those who protest in violation of a police ban risk penalties not only for flouting outbreak-control measures, but also participating in an illegal or unauthorized assembly, or in some cases, rioting. Police have stepped up arrests since last year’s unrest, and charged 13 activists including media tycoon Jimmy Lai and two opposition lawmakers with allegations of inciting others to join unauthorized assemblies that coalesced on June 4 despite the ban.

Opposition groups have accused Hong Kong Chief Executive Carrie Lam of extending the social-distancing rules longer than necessary to suppress protests, a charge she has denied. Hong Kong has confirmed about 1,200 cases since the outbreak began and hasn’t discovered a locally transmitted case since June 14. The government extended the current crowd limits, which had been set to expire July 2, until July 16.

The Hong Kong government abandoned its only previous attempt to enact national security laws in 2003, after about a half million people attended the July 1 march in opposition. Lam and other officials have said that decision left a “gaping hole” in the city’s Basic Law that encouraged radicalism and required Beijing to step in and impose its own legislation.