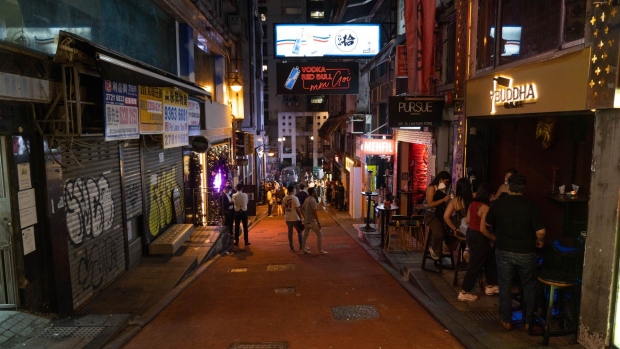 (Bloomberg) -- Hong Kong’s bar and nightclub owners were caught off-guard when government officials announced that their patrons would have to show proof of a negative Covid-19 test in order to enter, starting in just two days.

The decision ran counter to guidance the city’s outgoing Chief Executive Carrie Lam had been giving for weeks, namely that her administration wouldn’t change the rules before her successor, John Lee, takes over on July 1. New clusters of infection, accounting for 350 cases at six bars, changed the calculus, health officials said as they disclosed the requirements at Tuesday’s daily briefing.

While bar and nightclub managers are still trying to figure out how to implement the new restrictions, the fallout has already begun for an industry that was only recently allowed to reopen after Hong Kong’s brutal omicron wave this spring. It’s vexing because owners reached out to the government when reports of bar clusters first emerged earlier this month to see what they could do, but never heard back, said Ben Leung, founding president of Hong Kong’s Licensed Bar and Club Association.

“We have 20 to 30 party bookings in the coming two weeks, and most of them have been canceled since the announcement yesterday,” said Leung, who owns a bar in the city’s Tsim Sha Tsui neighborhood. “It’s almost like requiring us to suspend business,” with the threat of police enforcement hanging over their heads, he said.

The increasing number of infections in Hong Kong -- 849 were recorded on Tuesday, more than double the daily numbers in May -- is creating a problem as the city prepares for the 25th anniversary of its handover from British to Chinese rule. It’s slated to be a major event, and many believe that China’s President Xi Jinping is preparing to travel to the city, if favorable conditions are met.

Allan Zeman, who owns the bulk of Hong Kong’s Lan Kwai Fong nightclub district, said he understands the pressure the government is under as the anniversary date nears. Adding another layer of testing for nightlife venues, however, isn’t likely to have much of an impact since they account for a “minuscule” number of the overall infections, he said.

“Most people do self-test now,” he said. “It’s become almost a norm for many people. Of course, it’s another impediment for our tenants,” he said, predicting it may impact 10% to 15% of their business.

“I’m hoping in the next administration, after July 1 when John Lee takes over, things can relax,” he said.

There have also been rising case counts tied to schools and travel, with the number of flights into Hong Kong rising dramatically as summer holidays approach, even with the ongoing quarantine requirements.

“A lot of infections come from other places than bars, like schools, dancing groups and so on,” the Licensed Bar and Club Association’s Leung said. “Why are they only targeting bars? We have been suffering repeatedly from shutdowns and everything.”

Leung remains uncertain about how his workers are supposed to enforce the new rule, which requires patrons to show a photo of their negative result on a rapid at-home antigen test that they take within 24 hours of visiting the venue. They are also required to provide their name, and disclose the date and time they took the test. The police have been asked to increase their enforcement activity, Health Secretary Sophia Chan said.

While it makes sense for people to test themselves before going to a bar, that holds true no matter where they are going, said Benjamin Cowling, chair of epidemiology at the University of Hong Kong’s School of Public Health. Even if bars were closed, there would still be infections occurring as those clusters make up a small portion of the overall cases in Hong Kong, he said.

The government should distribute rapid tests to the public to be used regularly, including before going to public spaces such as gyms, functions or other gatherings, he said. And while testing won’t stop transmission, it could reduce it, he said.

The new rule has echoes of the approach increasingly being deployed in the mainland, where testing has become essential to gain entry to workplaces, shopping malls, and even public parks. It’s a key part of the Covid Zero strategy still being deployed in China, and to some extent Hong Kong, even as the rest of the world opens up and learns to live alongside the virus.