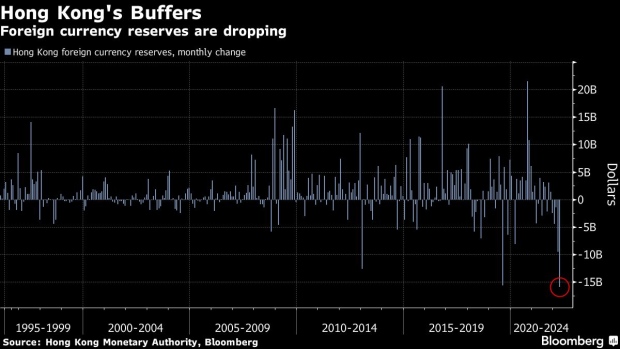 A commuter in Central district in Hong Kong, China, on Thursday, Jan. 27, 2022. Hong Kong’s economic performance in the fourth quarter may provide little consolation as the city struggles to bring the omicron wave under control, putting pressure on the government to dole out more stimulus for hard-hit sectors like retail. , Bloomberg

(Bloomberg) -- For global investors trying to the gauge the fallout from surging interest rates and slowing economic growth, Hong Kong is quickly emerging as a must-watch market.

This week saw the city intervene to prop up its pegged currency for the first time since 2019. Its stock market has tumbled this year at one of the fastest rates globally. Home prices in the world’s least affordable property market are falling and signs of capital flight are multiplying, after portfolio outflows last year topped $100 billion for only the second time since Hong Kong’s 1997 handover to China.

“There’s a lot the city can do to stabilize the financial system when capital inevitably flows out,” said Rujing Meng, who lectures on finance at the University of Hong Kong. “What’s difficult to predict is how bad sentiment can get globally. Things could get very volatile and systems could break before people get used to quantitative tightening. Hong Kong can’t be immune to that.”

The city has for more than a decade ridden a wave of cheap money inflated by central bank stimulus. Its companies repatriated funds to meet their liquidity needs when the global credit squeeze took hold in 2008. China’s economic boom attracted capital into the city as mainland firms rushed to sell new shares. An estimated $130 billion flowed in after the Fed began quantitative easing in late 2008, according to the Hong Kong Monetary Authority.

Investors parked their cash in the city because of its relatively safe and easily convertible currency. The abundance of money meant that even when the Fed raised borrowing costs in the 2015-2018 cycle, local rates stayed relatively low. The aggregate balance -- a measure of interbank money supply in Hong Kong -- is about 70 times greater than it was before the global financial crisis.

The result of QE has been a property bubble, with residential prices rising 237% from 2008 through a record in August last year, Centaline data show. About $6.5 trillion was added to Hong Kong share values, allowing the city’s stock market to briefly overtake Japan’s as the world’s third-largest.

Now, the flow of capital is going in the other direction. Among the world’s worst performers even before the Fed raised interest rates, Hong Kong’s Hang Seng Index lost 40% in the year through March 15. Financial non-reserve assets dropped by a net HK$379 billion ($48.3 billion) in 2021 -- equivalent to 13.2% of the city’s gross domestic output -- as portfolio outflows outweighed direct investment.

The outflows are eating into Hong Kong’s crisis buffers. The city’s foreign reserve assets dropped for five consecutive months, including a $15.9 billion decline in April. Hong Kong’s wealth fund lost $7 billion in the first quarter as the value of stocks and bonds declined.

Liquidity in the financial system is keeping the city’s interbank rates low for now, while those in the US are rising rapidly. That makes it profitable for currency traders to borrow in Hong Kong dollars and buy assets in the higher-yielding US currency. The carry trade, which was also popular in 2019, will continue until the HKMA’s liquidity drainage causes Hong Kong’s Hibor rates to catch up with their US equivalents.

When that happens, watch the property market, where residential prices have fallen 4.5% since August. Hong Kong banks last week maintained their best lending rates -- which they use to quote mortgage loans -- even as the HKMA increased borrowing costs. Lenders can do that because they still borrow cheaply from each other. However, economists at DBS Bank Ltd. predict one-month interbank rates will be around 200 basis points higher than current levels by year end.

As a small and open economy, Hong Kong is especially vulnerable to money flowing in and out. It was hit hard by the Asian financial crisis that started in Thailand in 1997 and spread across the region, forcing the HKMA to buy Hong Kong stocks and use foreign-currency reserves to defend the dollar peg. House prices tumbled 70%.

Today the city is far better equipped to deal with external shocks. That’s even as stress builds in just about everything across markets worldwide, from collapsing stablecoins to one of China’s largest developers defaulting for the first time. The HKMA this week reiterated that the linked exchange rate system --  a currency peg has endured mostly unscathed for almost 40 years -- is functioning well.

“Hong Kong just has to see this year through,” said Samuel Tse, an economist at DBS in Hong Kong, adding that he expects the city’s banks to not lift prime rates until the third quarter.

“I’d expect things to stabilize by then,” said Tse. “The stock market will recover, Chinese relistings will bring in capital and money will come back in. This won’t be the end of flush liquidity in Hong Kong. Not this time.”