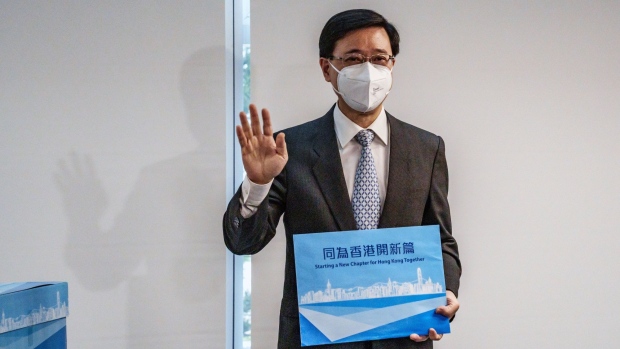 John Lee, Hong Kong's former chief secretary, poses for the media ahead of submitting his application for the upcoming Chief Executive election in Hong Kong, China, on Wednesday, April 13, 2022. Lee said he has secured 786 nominations from election committee and submitted application to run for the city’s top post. , Bloomberg

(Bloomberg) -- The Hong Kong government confirmed that John Lee was only candidate nominated for chief executive, clearing the way for him to take power after an uncontested leadership election next month.

Lee, 64, a former chief secretary for administration and police official, received 786 valid nominations from the roughly 1,500-member Election Committee that picks the city’s leader, the government said Monday. Support from more than half of the panel makes the election planned for May 8 a fait accompli.

A one-horse race had been widely expected after Chief Executive Carrie Lam announced earlier this month that she wouldn’t seek a second term, citing a need to spend more time with her family. China’s Liaison Office told local elites shortly after Lam’s announcement that Lee had the blessing of President Xi Jinping’s government to become chief executive, local media including the South China Morning Post reported.

Last week, Lee said he had received nominations from more than half of the committee, which Chinese lawmakers had overhauled last year, reducing the number of opposition votes. Lam’s successor will take office July 1, a date that marks the halfway point in Beijing’s 50-year pledge to preserve the liberal financial and political systems in the former British colony.

Lee has vowed to protect the city’s status as a global financial center and maintain its competitiveness.