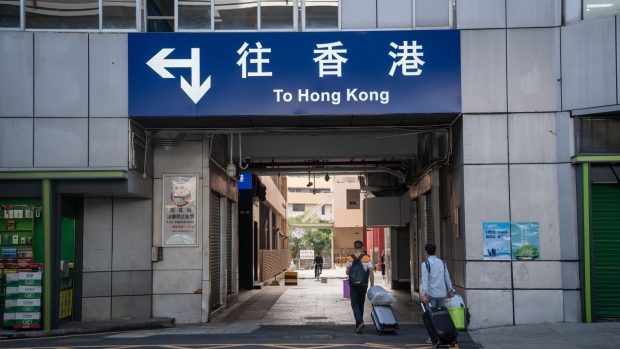 Pedestrians with luggage walk under signage reading "To Hong Kong" near the Luohu border crossing in Shenzhen, China, on Friday, Nov. 20, 2020. Strict border curbs have helped Asia contain the coronavirus better than other parts of the world, with countries from China to New Zealand limiting the entry of travelers and imposing mandatory quarantines as a way of stopping the virus at their doors. Photographer: Yan Cong/Bloomberg , Bloomberg

The suggestion came from the Asian financial hub’s business community, which said their needs can be met while Hong Kong continues to work toward a full re-opening with the mainland, the report said. It didn’t give details on how the system may be implemented, or when Lee may formally propose the plan.

Closed-loop systems typically require employees to live in hotels or factory dormitories, sealing workers off from their families and the wider community. They’ve frequently been deployed in mainland China to keep production running during its spate of recent lockdowns, with Tesla Inc.’s Gigafactory requiring workers sleep on factory floors during the six-week Shanghai lockdown.

China remains staunchly committed to Covid Zero, even as the highly contagious omicron variant seeds more frequent outbreaks that are met with increasingly onerous mitigation measures. While Shanghai’s situation has come under better control, there’s ongoing spread in Beijing and clusters are popping up in other parts of the country, highlighting the challenge Lee faces in seeking to resume travel.

Hong Kong’s current leader Carrie Lam said earlier this month that the city will need to ask mainland authorities what the city must do in order to start quarantine-free travel after a virus outbreak late last year derailed discussions. The financial hub is over the worst of its deadly wave, but still reporting about 200 to 300 infections a day.

Lee has previously said one of his top priorities as leader would be to making international travel to the city accessible again but also resume normal travel with the mainland.