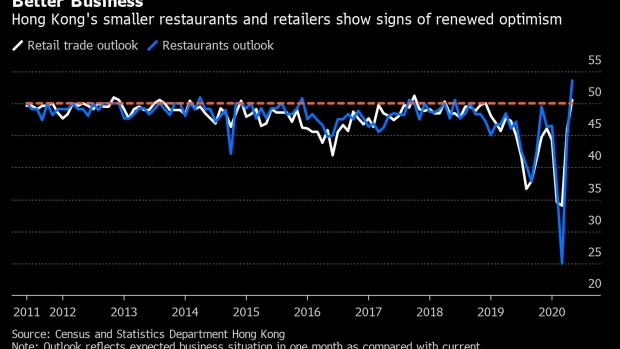 (Bloomberg) -- Hong Kong’s retailers suffered another difficult month in May as the ongoing coronavirus pandemic continued to curtail the city’s key tourism and consumption activity.

While still registering deep monthly declines, Hong Kong’s retail sales situation has shown some signs of improvement since posting back-to-back months of drops greater than 40% in February and March during the initial wave of coronavirus shut downs. The city has been able to keep the virus largely under control, with confirmed cases at about 1,200 by the end of June.

Recent moves by the Hong Kong government to gradually loosen some social distancing rules, including some restrictions on indoor and outdoor gatherings, are fueling optimism among the city’s battered retail, accommodation and entertainment industries of a summer resurgence in spending from locals who have been stuck at home for months. The long-awaited distribution of a HK$10,000 cash handout to Hong Kong residents beginning in July may also help spur spending.

Yet concern remains that any consumption boost from this pent-up demand will be temporary amid rising anxiety over China’s new national security law for Hong Kong. The city’s economy also remains dependent on external tourism, particularly from mainland China, which is unlikely to return in the near term. Visitor arrivals to the city fell 99.9% from a year ago to about 8,100 people in May, according to the Hong Kong Tourism Board.