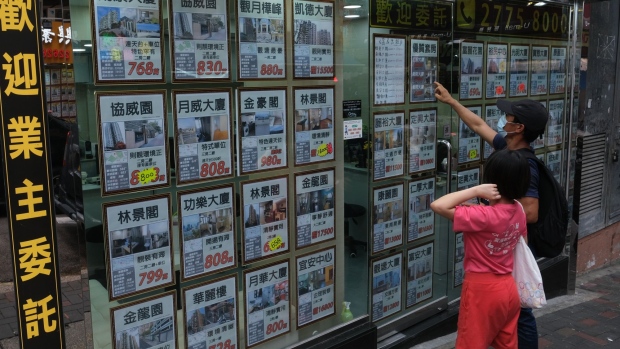 People look at advertisements displayed at a property agency in Hong Kong, China, on Sunday, May 31, 2020. Home prices in the world's priciest city for real estate have so far held up well amid the economic distress, declining barely more than 1% since January. Photographer: Roy Liu/Bloomberg , Bloomberg

(Bloomberg) -- The Hong Kong government is considering suspending a plan that would have introduced a vacancy tax on new housing stock, the Transport and Housing Bureau said.

The reconsideration was prompted by community feedback and the state of the economy, a bureau spokesperson said. Hong Kong has been battered by last year’s anti-government protests and the coronavirus pandemic, with the government forecasting a contraction of as much as 8%.

The move to squash the tax would be a relief for property developers, who would have been subject to a hefty tax and jail time if they failed to sell new apartments. Hong Kong had 44,890 vacant new homes as of late 2019, representing 3.7% of the city’s total stock, and a decrease from 2018’s 4.3%, according to government data.

The plan to tax vacant new homes was among Carrie Lam’s proposed policies to tackle the city’s sky-high property prices in 2018. However, the bill has yet to pass in the legislative council, which went through months of suspension due to last year’s protests.

Despite a recession, homes sales in Hong Kong remain buoyant. A new residential project with accessible transportation was oversubscribed by more than 50 times this week, making it one of the most popular apartment sales in the city in over a decade.