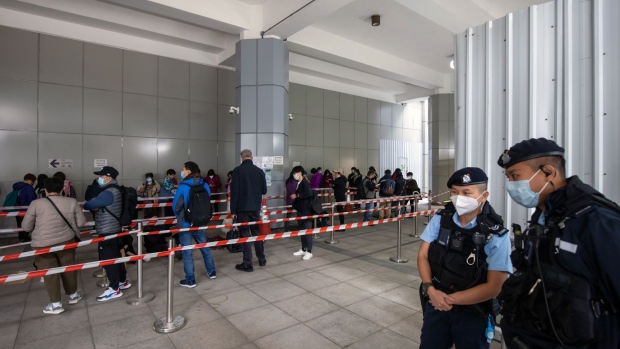 The court will meet again on Dec. 13 to discuss a timetable for Lai’s trial, which was originally scheduled to start Thursday.

The government sought the adjournment to prevent Lai’s UK lawyer from representing him during the trial. After failing to get the local courts to bar Timothy Owen, the city’s leader John Lee said on Monday he would ask Beijing to examine whether overseas lawyers should be allowed to take on national security cases under the law.

Lai, 75, faces a possible life sentence if he is convicted of colluding with foreign forces in a trial. Prosecutors allege that Lai sought international sanctions against Hong Kong and China through his pro-democracy newspaper.

Lee said on Monday the government currently has no way of ensuring overseas lawyers have no conflict of interest, or haven’t been coerced or comprised by foreign governments.

This would be the first time the National People’s Congress Standing Committee offers an interpretation of the national security law — endorsed by President Xi Jinping — since passing it in 2020 without public debate or a vote by Hong Kong’s elected legislature. The NPC is next expected to meet later this month.

The now-closed Apple Daily newspaper, which Lai founded, was one of the city’s most popular media outlets and championed greater freedoms in the Asian financial center before it was targeted by authorities who arrested senior editors, froze its bank accounts and effectively forced it to close in 2021.

The US, UK and other Western nations have condemned the closure of Apple Daily and the security law, with President Joe Biden saying Beijing was using it to “suppress independent media and silence dissenting views.” US Secretary of State Antony Blinken previously called for Lai’s release, after a separate conviction related to the activist’s participation in a pro-democracy rally.

This week marks Lai’s two-year anniversary in jail on national security charges. During that time, he’s been sentenced to 20 months in jail for his role in unauthorized assemblies related to the 2019 protests, and been convicted of fraud.

The national security law is aimed at punishing acts of secession, subversion, terrorism and “collusion with foreign and external forces.” It asserts broad  powers to control sources of opposition, from democracy advocates to news agencies to overseas dissidents.

(Updates with more details on Lai in second-last paragraph.)