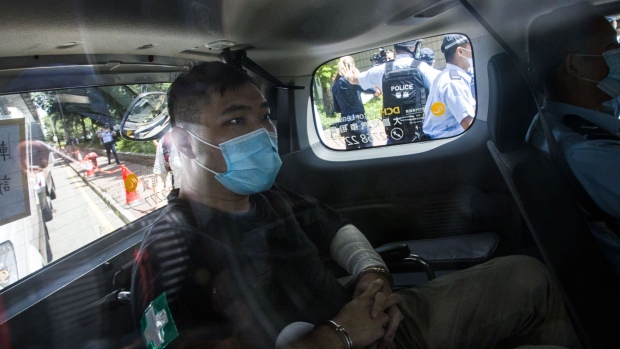 (Bloomberg) -- A Hong Kong court is scheduled to deliver the first verdict under national security legislation imposed by Beijing, giving the public a glimpse of how cases that can bring prison sentences as long as life will be handled.

Tong Ying-kit, who was accused of driving a motorcycle into a group of police officers, will hear the decision on Tuesday from three High Court judges selected from a panel chosen by Hong Kong Chief Executive Carrie Lam. The waiter, who has been held without bail for almost a year, pleaded not guilty to charges of incitement to secession and engaging in terrorist activities over his actions at a protest last year.

Prosecutors also handed Tong an alternative charge of dangerous driving causing grievous bodily harm, which he also pleaded not guilty to. The move could allow them to get a conviction if they failed with the terrorism charge.

Since the national security law was imposed in the wake of large and often violent protests in the Asian financial hub in 2019, some 138 people have been arrested under the legislation -- about three-fourths for speech-related incidents. That number includes much of the former pro-democracy opposition in the Legislative Council and figures such as former student leader Joshua Wong and Jimmy Lai, the 73-year-old media mogul whose pro-democracy newspaper was recently forced to close.

The Group of Seven nations said Beijing failed to meet the terms of its handover agreement with the U.K. by forcing the legislation on Hong Kong. In response, the U.S. has rolled back some special privileges granted to the city and sanctioned senior officials who oversee the territory.

The security law bars secession, subversion, terrorism and colluding with foreign forces. Like Tong, many of the people arrested under it are being detained before their trials, which marks a departure from Hong Kong’s common law traditions and is similar with how the judicial system of mainland China works.

Hong Kong officials say the legislation targets only an “extremely small minority,” but human rights groups and foreign governments say it is being wielded to erode political freedoms. Tong was among several people arrested during protests against the law on July 1, 2020 -- just after it had been handed down without any input from local lawmakers or the public.

Tong was accused of displaying a flag from his motorcycle reading “Liberate Hong Kong; revolution of our times,” a protest slogan banned under the security law even though it had been chanted by tens of thousands of people during the 2019 unrest. Police also said he rode the motorcycle into a group of officers, injuring three.

During the trial, one of the prosecution’s witnesses, Lau Chi-pang, a professor of Chinese history at Lingnan University, said the Chinese definitions of “liberate” and “revolution” established more than 1,000 years ago suggested a desire to overthrow the government.