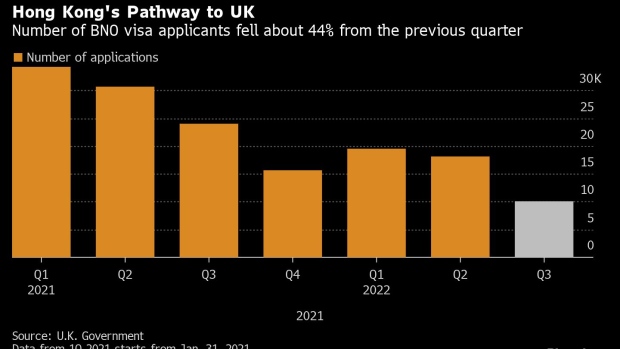 A copy of the British National (Overseas) passport arranged in Hong Kong, China, on Saturday, Jan. 30, 2021. Prime Minister Boris Johnson estimates about 300,000 Hong Kong citizens will take advantage of a new visa route to leave the former British colony and settle in the U.K., despite nearly three million people being eligible. , Bloomberg

(Bloomberg) -- The number of Hong Kong residents applying for a path to UK citizenship fell 44% in the third quarter, showing that demand for the program is waning almost two years after it was created in response to China’s crackdown on dissent.

Some 10,100 British National (Overseas) passport holders applied for the special long-term visas between July and September, according to data released Thursday by the UK Home Office. That represents the smallest amount number in a three-month period since London began taking applications in January 2021.

The UK has so far received 150,600 visa applications under the BN(O) program, slightly less than halfway to the 320,000 that the government estimated would apply in the first five years. About 98% of applications received have been approved.

Then-Prime Minister Boris Johnson’s government announced the visa after Beijing imposed a sweeping national security law on the former British colony in June 2020. Johnson described the legislation as a “serious breach” of the UK’s handover agreement with China, while Beijing in turn accused London of violating a promise not to lure away the city’s residents and stopped recognizing the passports.

How a British Passport Offers Escape for Hong Kongers: QuickTake

The BN(O) exodus contributed to Hong Kong’s biggest population decline in at least six decades, a trend fueled by the security law and Covid curbs that have slowed travel into and out of the Asian financial hub. The city saw a decrease of 121,500 residents in the year that ended on June 30, leaving the population at about 7.29 million.

The recent fall in BN(0) applications coincided with mounting concerns about inflation in the UK, although the period largely predates the fiscal turmoil that crashed the pound and forced former Prime Minister Liz Truss to resign after just 44 days. Hong Kong Chief Executive John Lee has been rolling back virus curbs since taking office in July, making international travel easier.

The UK government has from October expanded the pathway to citizenship to include those born after 1997, the year Hong Kong returned to Chinese rule, and those who have at least one parent with BN(O) status.