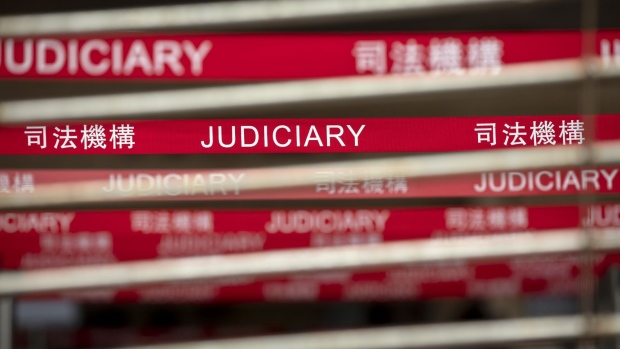 Barrier tape reading "Judiciary" at the West Kowloon Magistrates' Courts in Hong Kong, China, on Friday, March 4, 2022. Pro-democracy activists are being prosecuted over their roles in helping organize a primary that drew more than 600,000 voters in July 2020 to choose candidates for Legislative Council elections that were later postponed. Photographer: Paul Yeung/Bloomberg , Bloomberg

(Bloomberg) -- Hong Kong has denied a jury trial to dozens of democracy advocates facing life in prison under a China-imposed national security law, according to local media, raising concerns over the rule of law in the former British colony.

His decision upholds a break with Hong Kong’s common law judicial tradition in such cases -- so far, no national security law defendant has been granted a jury.

Lam wrote that a jury trial carried “a real risk that the due administration of justice might be impaired,” according to the newspaper, which saw the document. He named “involvement of foreign factors” and the “personal safety of jurors” as reasons for the decision, citing provisions in the law for mandating a trial by judge.

The order is likely to fuel growing concern that Hong Kong’s legal system, for decades a foundational pillar of its standing as an international financial center, is becoming more influenced by the mainland where the Communist Party controls the courts.

A Department of Justice spokesperson declined to comment on individual cases or share the document, only saying the justice secretary considered cases “in accordance with the relevant laws of the national security law of Hong Kong and the individual circumstances of each case.”

“The purpose is to ensure a fair trial, uphold judicial justice, and in no way detract from any legitimate rights and interests of the defendant,” the spokesperson added.

The 47 activists are being prosecuted for subversion, after organizing a primary that drew more than 600,000 voters to choose candidates for Legislative Council elections. Authorities argue that vote in July 2020, as well as plans to force the resignation of then-Chief Executive Carrie Lam using a provision of the city’s mini-constitution, were an illegal attempt to paralyze the government.

Some 30 of the defendants, who include organizers of the 2019 anti-government protests and already jailed activist Joshua Wong, have been held without bail for more than a year, under the higher threshold set by the security law.

The Hong Kong government has long maintained that foreign forces stoked the 2019 demonstrations. That unrest spurred Beijing to impose the security law in June 2020, which criminalizes subversion, secession, collusion with foreign forces and effectively banned all political protests in the city.

Lower court Magistrate Peter Law overturned his previous restriction on pre-trial proceedings, after defendant Chow Hang-tung filed in a legal challenge. It’s the first time such hearings will be reportable in a national security case.

Three former leaders of the Hong Kong Alliance in Support of Patriotic Democratic Movements of China have been denied bail since being charged with subversion last September, with only basic details being reported from their court appearances.

The government gave no specifics on their crime at the time of arrest, only saying that the offenses had occurred since July 1, 2020, the first full day the security law took effect.