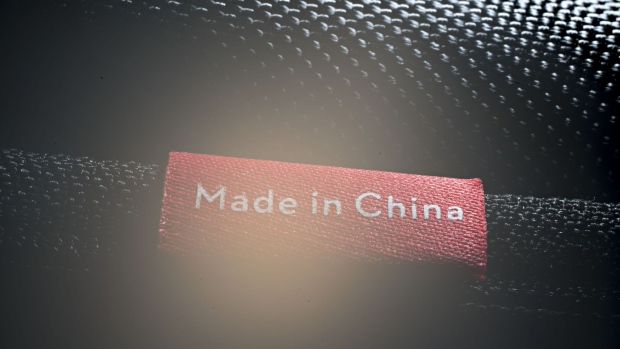 The words "Made In China" are seen on an object displayed for a photograph in Tiskilwa, Illinois, U.S., on Tuesday, April 10, 2018. A week after escalating tensions with his threat to impose tariffs on an additional $100 billion in Chinese products, President Trump said Thursday the two countries ultimately may end up levying no new tariffs on each other. Photographer: Daniel Acker/Bloomberg , Bloomberg

(Bloomberg) -- Hong Kong has made a “formal intervention” at a meeting of the World Trade Organisation, demanding the U.S. withdraw its pending regulation to label goods manufactured in the city as “Made in China,” according to a report in the South China Morning Post.

Laurie Lo, Hong Kong’s permanent representative to the WTO, took the action during a session of the body’s general council Tuesday, though has not yet launched a formal WTO case against the U.S., the report said.

“Hong Kong, China expresses our strong objection to the revised origin marking requirement imposed by the U.S.,” Lo said, according to the report. The U.S. responded at the meeting that it was reviewing Hong Kong’s concerns and would reply once the review was complete, SCMP reported, citing a Hong Kong government spokeswoman.

Messages left with the Hong Kong government to confirm the report were not immediately returned. The city retains separate representation at the global trade body and has a separate customs jurisdiction from mainland China.

The U.S. government announced the policy in August -- labeling imports from the city as “Made in China” rather than “Made in Hong Kong” -- as a result of the U.S. action to revoke Hong Kong’s special trading status. U.S. Customs and Border Protection in an Aug. 21 notice extended the start date for the rule by 45 days, through Nov. 9, “in an effort to allow importers ample time to comply.”

Edward Yau, the city’s commerce and economic development secretary, said in August the demand was unreasonable and uncivilized.