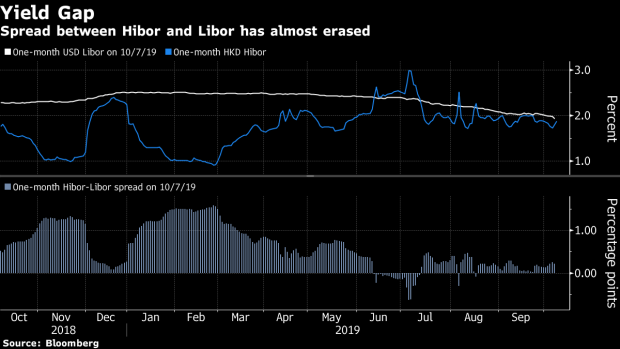 (Bloomberg) -- One thing Hong Kong policy makers haven’t had to worry about amid the worsening protests is a run on the city’s currency.

The Hong Kong dollar hasn’t once reached the weak end of its trading band against the greenback since the protests began four months ago. The last time it was in serious danger of touching the weak limit of HK$7.85 was in May. This is despite a plunge in the city’s stock market, repeated blockades of key parts of the city and a precipitous decline in retail spending.

While a lack of substantial capital outflows may be providing some support, a narrowing of the gap between local and U.S. borrowing costs is likely to be having a bigger impact. At the end of February, the Hong Kong one-month interbank rate (known as Hibor) was about 1.6 percentage points below the U.S. Libor equivalent, making it profitable to short the local currency and buy U.S. assets. Now the gap is less than 25 basis points.

“Normal drivers of the currency have been more favorable,” said Mitul Kotecha, a senior emerging markets strategist at Toronto-Dominion Bank. “The Libor-Hibor spread has remained low. Liquidity pressures that have existed in the past and put pressure on the peg are just not there.”

The Hong Kong Monetary Authority spent HK$22.1 billion ($2.8 billion) defending the currency in March after it fell beyond the weak end of the trading band.

There are bears out there, of course. Hedge funds including Hayman Capital Management are betting the unrest will spur capital flight, drive up interest rates and force the abandonment of a currency policy that has underpinned Hong Kong’s economy for more than three decades. The local government may take more extreme steps to curtail protests, which could shock investors into pulling funds out.

But for Kotecha, the fact the currency has been resilient so far shows it’s not something to seriously worry about.

To contact the editors responsible for this story: Richard Frost at rfrost4@bloomberg.net, Kevin Kingsbury, Magdalene Fung