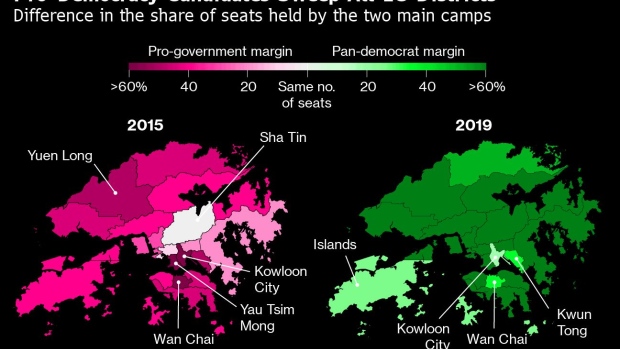 On Sunday, the masses again spoke clearly and peacefully -- this time giving 85% of 452 District Council seats to pro-democracy candidates, a swing of more than 50 percentage points. Nearly 3 million people cast ballots in the first vote since the unrest began for a record turnout of 71%.

While District Councils don’t have much power, for Lam it represents yet another chance to find a political solution to end some five months of increasingly violent unrest. On Monday she vowed to “listen to the opinions of members of the public humbly and seriously reflect.” She’s scheduled to hold a regular press briefing Tuesday morning.

Investors looked on the bright side, sending Hong Kong’s benchmark Hang Seng Index higher on the hope that the government would now soften its tone. Stephen Innes, chief Asia market strategist at AxiTrader, based in Bangkok, said it “will be difficult for Beijing to ignore these results.”

Hong Kong’s Next Flashpoint: The First Vote Since Unrest Began

But many others didn’t expect much to change. While Lam’s Beijing-backed administration belatedly withdrew the bill allowing extraditions to China that spawned the demonstrations, it has since refused to meet other demands including calls for an independent Commission of Inquiry into police abuses and the right to nominate and elect the city’s top leaders.

“I don’t think that there will be a political compromise from either camp any time soon,“ said a 26-year-old office worker surnamed Mok, who has been on the front lines of the demonstrations. “Carrie Lam does not have to give in since her mandate was not from the people in the first place, but from Beijing,” he added. “The protesters will keep on fighting.”

The first comments from Beijing weren’t encouraging. Speaking to reporters in Japan, Foreign Minister Wang Yi said the results wouldn’t change the fact that Hong Kong is part of China. State-run China Daily wrote that it’s “hard to imagine how many people’s opinions the election result represents” given the violence that occurred in the past few weeks.

“Stopping violence and restoring order is the paramount task in Hong Kong at the moment,” Geng Shuang, a spokesman for China’s foreign ministry, told reporters in Beijing. “Hong Kong is China’s Hong Kong. It is purely the internal affairs of China.”

China’s failure to understand the city’s politics managed to turn a specific mistake by the government into “a major crisis” that has turned Hong Kong from a peaceful metropolitan city into one marked by daily chaos, said Steve Tsang, the director of the China Institute at London’s School of Oriental and African Studies and the author of several books on Hong Kong.

“Neither Beijing nor Government House in Hong Kong will understand it,” said Tsang, referring to Sunday’s election results. “And I think they’re more likely to react negatively.”

The newly elected district councilors are limited to mostly advising the chief executive on matters like fixing up parks and organizing community activities. Most importantly, however, they help appoint 117 of the 1,200 electors who select the chief executive, which would give pro-democracy forces more choice over candidates who must still be approved by Beijing.

Why Hong Kong Is Still Protesting and Where It May Go: QuickTake

James Tien, a former pro-establishment lawmaker, said the extra votes would make it harder for Beijing to install its preferred leader during the next chief executive election scheduled for 2022 -- even if China can still vet the candidates allowed to run for Hong Kong’s highest office. Given the result, he added, the government would be wise to consider meeting the demand of a commission of inquiry.

“The government now will probably have to seriously think about it,” Tien said. If violence dissipates, he added, “the government will have no excuse not to have a commission of inquiry.”

While the protests have disrupted daily life in Hong Kong, the election results showed the public remains firmly against Lam’s government. Unhappiness with her administration has risen and Lam’s own popularity has fallen to record lows as the protests morphed into a wider push-back against Beijing’s grip.

If Lam clearly communicates that she is willing to listen to the people and make a political compromise after previously ruling out further concessions, it could renew protesters’ faith in the city’s political system, according to pro-democracy lawmaker Fernando Cheung. The government has previously said it would hold further dialogue if the violence ends.

“It’s a slap in the face for the government -- a big ‘no’ to them -- but at the same time, it’s a message for the protesters, that peaceful means are powerful,” Cheung said. “If it’s not respected by the regime, then we’re talking about a further escalation of violence.”

It might not take long before things heat up again. Pro-democracy winners scheduled a rally on Monday afternoon to support dozens of protesters at Hong Kong Polytechnic University who have been surrounded by police for more than a week. The Civil Human Rights Front, which has organized some of the city’s largest rallies, is planning a mass rally for Dec. 8.

Why Hong Kong’s Universities Have Turned Into Battlegrounds

Even after the stunning repudiation at the polls, some front line protesters said they don’t have much hope she’ll engage in dialogue.

“It would be absolutely wise if she could finally compromise with us, especially on giving a commission of inquiry,” said a 25-year-old office worker surnamed Ho. “However I don’t expect much from her.”

To contact the reporter on this story: Iain Marlow in Hong Kong at imarlow1@bloomberg.net

To contact the editors responsible for this story: Daniel Ten Kate at dtenkate@bloomberg.net, Karen Leigh