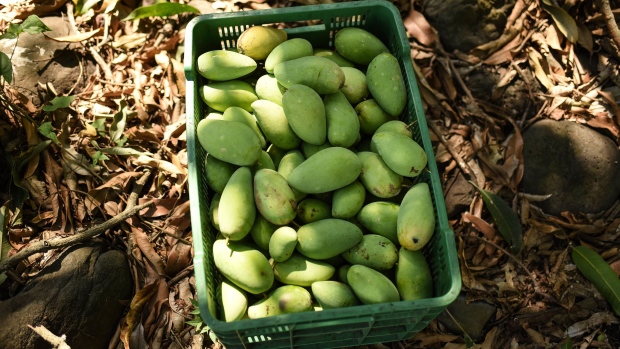 A crate of Manila mangoes on a farm in Actopan, Veracruz state, Mexico, on Wednesday, March 24, 2021. The National Mango Board (NMB) projects the total volume of mangoes shipped from Mexico to the U.S. over the next two months to be 34 percent higher year-over-year. Photographer: Hector Quintanar/Bloomberg , Bloomberg

(Bloomberg) -- Hong Kong ordered hundreds of mangoes imported from Taiwan tossed out after finding traces of coronavirus on the skin of just one of the orange-hued fruits.

The move is part of the once vibrant Asian financial hub’s efforts to reduce the risk of imported infections as it tries to contain a growing Covid-19 outbreak, despite the lack of scientific evidence that such products are a serious danger to people. It mirrors similar action taken in China, which has rejected food and other goods from around the world after testing turned up signs of the virus.

Hong Kong’s Centre for Food Safety instructed the distributor to dispose of the fruit after getting results from surveillance testing the 200-kilogram (441 pounds) shipment, the agency said in a statement Wednesday. It seemed to acknowledge the rarity of the risk, saying in the same statement that Covid-19 is predominantly transmitted through droplets and cannot multiply in food or food packaging.

Taiwan’s Council of Agriculture hit back, saying the measure isn’t scientific and calling on the city to adopt measures in line with international norms.

Nearby gambling hub Macau, which is experiencing its worst outbreak of the pandemic, destroyed two batches of Taiwan’s mangoes in the past week after similar testing results. The cities and mainland China, which takes a zero-tolerance approach to the virus, are the only places in the world that treat environmental samples from food or other objects as legitimate sources of infection.

Taiwan’s Ministry of Foreign Affairs mocked Macau in a tweet, questioning how the city’s authorities carried out testing on the fruit.

The recalls add to a challenging year for mango growers in Taiwan, who are facing an expected 47% fall in production to the lowest level since 1997 due to uneven flowering, low temperatures, rainfall and disease, according to Taiwan’s Council of Agriculture.

The World Health Organization and overseas food safety authorities say it’s unlikely the virus can be transmitted to humans via food consumption.