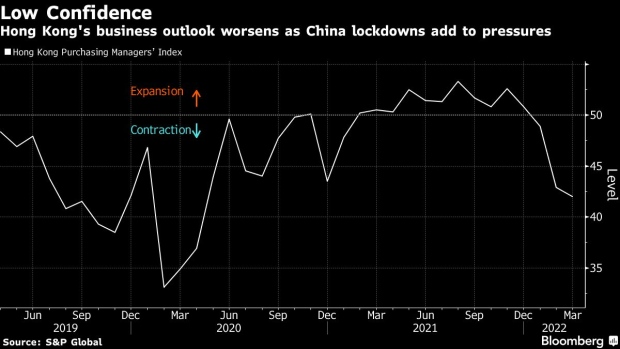 The S&P Global purchasing managers’ index fell to 42 in March from 42.9 in February, as the gauge continued to fall to levels not seen since April 2020. It was also the third consecutive month that the index was below 50, the level separating expansion from contraction.

New orders and output declined at a faster rate in March. Orders from the mainland “were affected by the Covid-19 lockdowns in the region,” S&P Global said in a statement.

Hong Kong has been fighting a prolonged virus outbreak for months, leading authorities to implement strict measures to control infections. Lockdowns in mainland China, meanwhile, are aggravating lead times and price pressures, according to the S&P Global statement.

“Hong Kong’s private sector can be seen shrinking at a faster rate in March, faced with all the negative consequences of the latest Covid-19 wave and the corresponding movement restrictions,” said S&P Global economics associate director Jingyi Pan. “Supply constraints, made worse by lockdowns in Mainland China, and price pressures, aggravated by the Ukraine war, further weighed on Hong Kong private sector firms.”

Still, employment levels rose in March. S&P Global said its survey respondents “ramped up their hiring activity after the fall in workforce capacity in February.”

The city is set to lift some measures from April 21, including allowing restaurants to reopen dinner service and let as many as four people dine together. The government will also start to distribute consumption vouchers this month in hopes of boosting the economy.