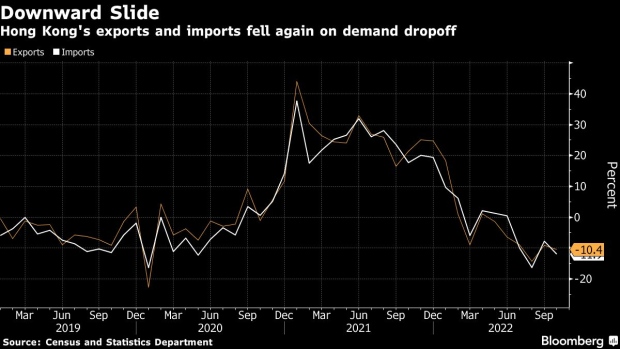 People sit along a promenade as gantry cranes stand at the Kwai Tsing Container Terminal in Hong Kong, China, on Thursday, Feb. 20, 2020. Hong Kong's container throughput fell 20.4% in January from a year ago according to preliminary figures posted on the Port Development Council's web site. , Bloomberg

(Bloomberg) -- Hong Kong’s exports fell again in October, marking six straight months of decline this year as demand continues to drop off an economic contraction this year appears all but certain for the city.

Overseas shipments dropped 10.4% last month from a year earlier, the Census and Statistics Department said Monday. That was worse than the median estimate of an 8% decline in a Bloomberg survey of economists, and compared with a decline in September of 9.1%.

Imports decreased 11.9% in October from a year prior, more than the expected fall of 6.4% in the Bloomberg survey.

The trade deficit was HK$20.9 billion ($2.7 billion), compared with a HK$44.9 billion deficit in September. It was less than economist estimates of a HK$39 billion shortfall.

The “further visible fall” in exports came as the “external environment deteriorated and disruptions to cross-boundary land transportation continued,” a government spokesman said in a statement accompanying the release. Exports to China, the United States and the European Union all recorded double-digit percentage declines, the spokesman added.

The spokesman said the city’s export performance “will stay under immense pressure, as elevated inflation and further monetary policy tightening in major advanced economies will continue to suppress global demand.”

Hong Kong’s economy has struggled this year as it slowly reopens from its pandemic isolation and as surging global interest rates and slowing demand continue to challenge growth.

The government expects gross domestic product to fall 3.2% for all of 2022, which would be the city’s third contraction in four years. Its 4.5% plunge in the third quarter was far worse than expectations.