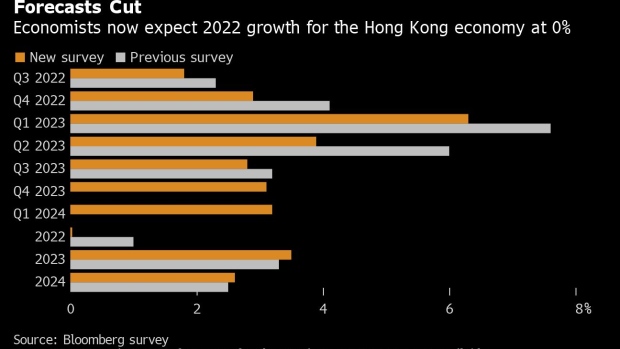 Advertisements for real-estate agents plastered on the shutters of a retail space in Hong Kong, China, on Sunday, July 31, 2022. Hong Kong is scheduled to release retail sales figures on Aug. 2. , Bloomberg

(Bloomberg) -- Hong Kong’s economy will struggle to expand at all this year, the latest Bloomberg survey of economists shows, as the city grapples with Covid restrictions, a trade slump and other global headwinds.

The government is set to cut its forecast for gross domestic product growth for the year when it reports final GDP figures for the April-to-June period on Friday. That would be the second downgrade this year, after officials cut their forecast in May to a range of 1-2% growth.

Economists have grown more pessimistic about Hong Kong’s prospects for the year after recent data showed the economy contracted for a second consecutive quarter. They now predict GDP will stagnate this year, down from earlier estimates of 1%, according to the latest Bloomberg quarterly survey.

Along with Covid curbs that have strained businesses and consumer activity, the city is contending with challenges from rising interest rates and weakening global trade. The US Federal Reserve has sharply raised interest rates several times this year to combat inflation -- moves that Hong Kong has been forced to follow to maintain the local dollar’s peg to the US dollar.

In addition, Covid outbreaks and restrictions in mainland China have hurt Hong Kong’s trade. After posting double-digit growth every month last year, Hong Kong’s exports contracted in May and June as demand in China slumped.

Financial Secretary Paul Chan recently said such problems would push the city to “inevitably revise down” its full-year growth forecast this month.

The restrictions also contributed to a record brain drain, with the city’s population falling 1.6% to around 7.29 million in the year ended June 30, government data released on Thursday showed.

Hong Kong did get some good news this week when Chief Executive John Lee said the city would reduce the amount of time arrivals must spend in hotel quarantine. But the existence of any isolation period at all -- it’s now three days in a hotel instead of seven, with a monitoring period afterward -- still places Hong Kong in stark contrast with other places that have moved on.

“Don’t expect this reduction in quarantine to change the world, because it’s not going to change the world,” said Alicia Garcia Herrero, chief economist for Asia Pacific at Natixis SA. “It’s just clear that the economy is doing really poorly and that mobility is a problem, especially cross-border mobility, which is much more important for Hong Kong.”

Some economists suspect Hong Kong’s economy could even contract in 2022, which would mark the third time in four years. Fitch Ratings Ltd. this week revised its annual growth forecast for Hong Kong to a 0.5% contraction, down from a previous forecast of 1%.

Although economic activity has marginally improved recently with some easing in Covid restrictions, the “recovery remains hampered by enduring social controls, which we view as unlikely to be rescinded fully until similar policies are relaxed in the mainland,” Fitch said.