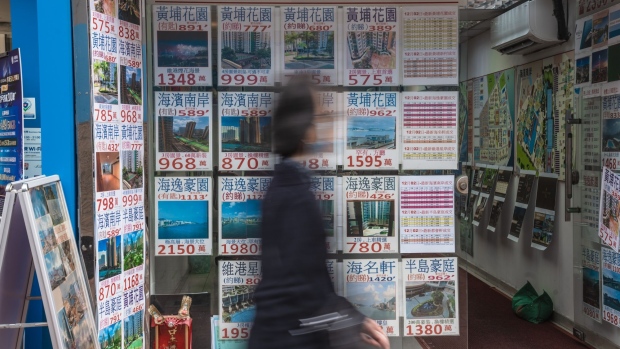 Listings for residential properties for sale at a real estate agency in Hong Kong, China, on Monday, Dec. 5, 2022. The slump in Hong Kong's home prices will deepen next year due to the combination of rising borrowing costs, a recession and an exodus of residents, according to Natixis SA. Photographer: Lam Yik/Bloomberg , Bloomberg

(Bloomberg) -- Hong Kong’s new home sales may surge by 50% in 2023 after the border with mainland China reopened and as interest-rate increases end.

That’s the view of Bloomberg Intelligence that sales of new residential projects in the city could jump 50% to HK$175 billion ($22.4 billion) in 2023 from the nine-year low in the past year. BI forecasts HSBC Holdings Plc’s prime rate — the city’s lending benchmark — to peak at 7% this year on expectations that the Federal Reserve may slow the pace of tightening.

Property developers are already saying that they are seeing homes being sold at an accelerated pace in recent weeks. Transactions are also being made at a faster rate in the past week amid more appointments to see apartments alongside a significant increase in inquiries, said Ricky Wong, managing director at Wheelock Properties (Hong Kong) Ltd. in an event on Monday.

“The bad news is in the past,” Wong said.

Henderson Land Development Co. sold 101 units for more than HK$475 million in its One Innovale - Cabanna project this month as of Tuesday, according to the company.

Hong Kong’s real estate companies were cautious about putting projects up for sale in 2022 as home prices retreated. The city recorded about 10,000 new home transactions last year, the lowest since 2013, while property values declined more than 15%.

After a population exodus in the past couple of years, there’s evidence recent government policies of attracting talent to the city has lifted confidence in the market and that housing demand from the newcomers could fill the gap left by those who emigrated.