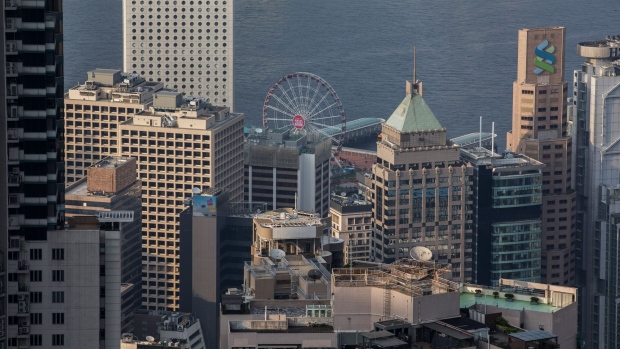 Buildings in the Central district are seen from Victoria Peak in Hong Kong, China, on Wednesday, Aug. 28, 2019. Hong Kong's hotel industry is struggling with a collapse in bookings after thousands of protesters shut down flights from the territory's airport in an escalation of months of clashes with police. Photographer: Paul Yeung/Bloomberg , Bloomberg

(Bloomberg) -- More talented workers are likely to leave Hong Kong if China imposes a vaguely worded national security law on the financial hub, according to one of the city’s most prominent investors.

David Webb, who amassed a fortune investing in Hong Kong stocks, said the city has already seen a “brain drain” as locals migrate overseas and international companies find it harder to attract expatriates. While details of China’s proposed national security legislation for the territory are still unclear, Webb said a vaguely defined law could fuel concerns among employers including banks that they’ll be liable if staff run afoul of authorities.

“The brain drain could damage the economy,” Webb said in an interview with Bloomberg TV’s Shery Ahn. “That’s something of great concern.”

China’s move to bypass local lawmakers and impose the controversial legislation on Hong Kong has cast fresh doubt on the city’s autonomy from the mainland, a key part of its appeal as an international financial center. While Chinese and Hong Kong government officials have said the law won’t impact the “legitimate” interests of foreign investors, analysts have warned that some residents and businesses may pull their families and assets out of the city.

Webb, who has been managing his own money since 1998, served as an independent director on the board of Hong Kong’s stock exchange operator from 2003 to 2008 and is a frequent commentator on the city’s regulation, corporate developments and politics. His publicly disclosed holdings of Hong Kong shares are valued at more than $100 million, a figure that likely understates his wealth.

Read more: The 20%-a-Year Stock Picker Who Wishes His Edge Would Disappear

Some Hong Kong-based investors have been more supportive of the national security law, saying it will help restore order to a city that has been rocked by anti-government protests over the past year.

Social stability will likely return to Hong Kong after details of the legislation are announced in August or September, Shan Weijian, chairman and chief executive officer of PAG, a Hong Kong-based alternative asset manager that oversees $38 billion, said in a letter to investors this week. He said Hong Kong’s position as an international financial center will remain unchanged and the law won’t impact PAG’s business.

Hong Kong’s financial hub status will ultimately depend on how Chinese and Hong Kong officials implement the security law and how countries like the U.S. respond, Webb said. Donald Trump’s administration has declared that Hong Kong is no longer autonomous from China and threatened to strip some of the city’s trade privileges, but the U.S. president has yet to announce specific measures or say how quickly they might take effect.