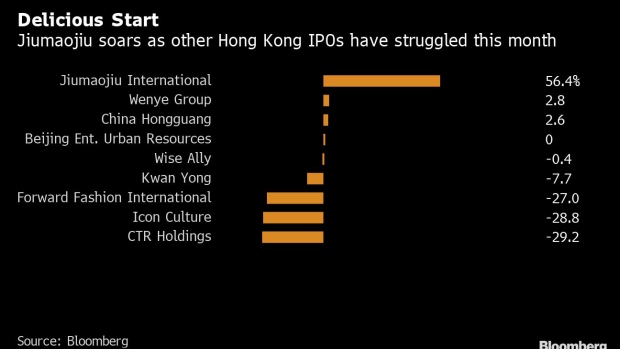 Hong Kong’s initial public offerings got a welcome lift Wednesday after a string of disappointing debuts, thanks to a purveyor of Chinese sauerkraut fish.

Jiumaojiu International Holdings Ltd., which operates nearly 300 restaurants under five brands including Tai Er and Double Eggs as well as its namesake Jiu Mao Jiu, soared 56% after pricing at the high end of expectations. Retail investors during the IPO process sought 638 times the amount of stock initially made available to them, according to an exchange filing Tuesday.

The stock’s jump, the best debut since app maker Newborn Town Inc.’s 93% pop on New Year’s Eve, brightened what’s been a rough start to 2020 for IPOs in the city.

Thursday may show whether Jiumaojiu was an outlier, as shares of Chinese TV drama producer Values Cultural Investment Ltd. are set to start trading. The retail portion of its HK$125 million ($16 million) IPO was 1,212 times oversubscribed, the company said Wednesday, and yet the deal priced at the low end of initial guidance.

Aside from Alibaba Group Holding Ltd.’s solid showing since its November local listing, last year didn’t end that positively for Hong Kong’s IPO market. Budweiser Brewing Co. APAC Ltd., which held the city’s biggest IPO of 2019 in September, is trading below its offer price while a Chinese pipe maker soared as much as 84% in its Dec. 18 debut before finishing lower. Maike Tube Industry Holdings Ltd. is now trading at barely half its IPO price.

Away from Jiumaojiu, the other IPOs on Wednesday were soft. Engineering-services provider CTR Holdings Ltd. slumped 29% to edge Icon Culture as 2020’s worst debut while waste-management firm Beijing Enterprises Urban Resources Group Ltd. finished flat after trading lower most of the day.

--With assistance from Jeanny Yu.

To contact the reporter on this story: Kevin Kingsbury in Hong Kong at kkingsbury2@bloomberg.net

To contact the editors responsible for this story: Sofia Horta e Costa at shortaecosta@bloomberg.net, David Watkins