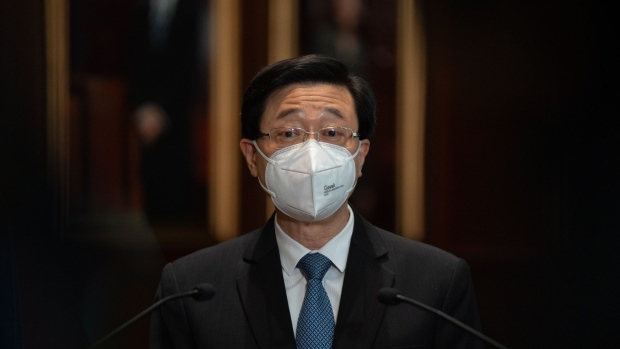 (Bloomberg) -- Hong Kong’s next leader will bolster his government with more manpower, in part to counter international criticism of China’s influence on the legal reputation of the financial hub.

“We have been bad mouthed by some politicians for political reasons, criticizing unfairly the system that is being practiced in Hong Kong,” John Lee said at a press briefing Tuesday afternoon. “It is important we tell the true story and reflect the true situation of Hong Kong to the world.”

Lee said he will add a deputy each to the Chief Secretary, Financial Secretary and the Secretary of Justice in a bid to bolster a government restructuring plan previously announced by outgoing Chief Executive Carrie Lam.

“I want the Secretary for Justice and the deputy to go out to explain in full the legal system in Hong Kong and the rule of law and the independent judiciary in Hong Kong, so as to let people know the true picture of Hong Kong,” he said.

Hong Kong has faced a barrage of criticism from the US and other Western democracies over its crackdown on dissent since the 2019 anti-government protests that rocked the financial hub.

President Xi Jinping’s government imposed a sweeping national security law on the city in the wake of that unrest. Convictions under the law can be punished by sentences of up to life in prison.

National security police have arrested some 180 people, including pro-democracy activists, journalists and opposition politicians, and several major news outlets in the city have shuttered under a pressure campaign.

The US sanctioned Lee -- Hong Kong’s former security chief and a vocal supporter of the security law -- over his role in curtailing political freedoms in the former British colony. Outgoing Chief Executive Lam says the law has restored stability to the financial hub.

Lee was selected to be the city’s new leader earlier this month in a contest where he was the only candidate. He takes office on July 1.

The restructuring process approved by the city’s de facto council on Tuesday would also split the Transport and Housing Bureau into two, create a new department to oversea cultural, sports and tourism affairs and revamp the Food and Health Bureau.

It could be completed by mid-June, Lee added, in time for him to take office on the 25th anniversary of the city’s handover from British to Chinese rule.