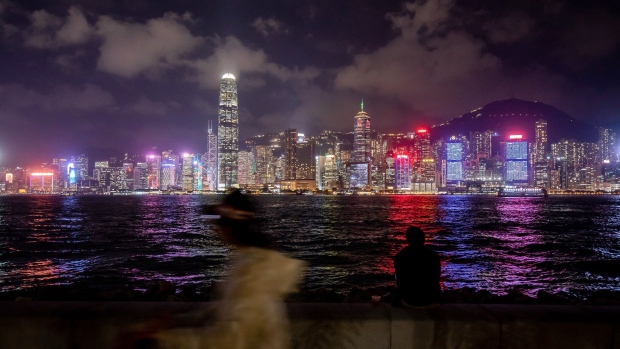 A pedestrian walks along a promenade in front of the city's skyline in Hong Kong, China, on Tuesday, Dec. 7, 2021. Hong Kong will prioritize quarantine-free travel for business people when its China border reopens, Chief Executive Carrie Lam said, warning that the city’s vaccination rate could curb a broader roll-out. Photographer: Paul Yeung/Bloomberg , Bloomberg

HKMA Chief Executive Eddie Yue told reporters Thursday that banks would “very likely” raise their deposit and lending rates by the end of the year as US interest rates continue to spike. That was the first indication by the de facto central bank this year that banks would raise rates.

Yue spoke after the HKMA earlier increased its base rate by 75 basis points to 3.5%, moving in lockstep with the US Federal Reserve, which hiked by the same magnitude. Hong Kong’s monetary policy moves in tandem with the US in order to preserve the local dollar’s peg with the US dollar.

“The public should be prepared for the Hong Kong dollar interbank rates to rise further,” he said. “With the continued rate hikes by the Fed, this trend is expected to continue. On the commercial interest rates of banks, banks will decide on the timing and magnitude of adjusting them, having regard to banks own funding call structures and other relevant considerations.”

Hong Kong’s biggest banks like HSBC Holdings Plc, Standard Chartered Plc and others have so far refrained from hiking their best lending rates despite increases in the HKMA’s base rate. However, speculation has mounted they may be preparing to raise borrowing costs now after some of the banks increased the cap on HIBOR-linked mortgage plans by 25 basis points in August.

Higher interest rates add another risk to economic growth, which is already slowing because of Covid-related restrictions and a slump in the global economy. The government has cut its growth forecast twice this year, predicting a possible contraction in gross domestic product.

The step by banks to raise the cap on mortgage plans was a “tactical move before they finally jack up prime lending rates by the end of this year,” Francis Chan, a senior analyst at Bloomberg Intelligence, said earlier this week. Banks are obliged to lift savings-deposit rates in tandem with prime rates, and hence will seek to lift lending rates only when the extra income earned on existing mortgage loans outweigh the interest paid to depositors, he said.