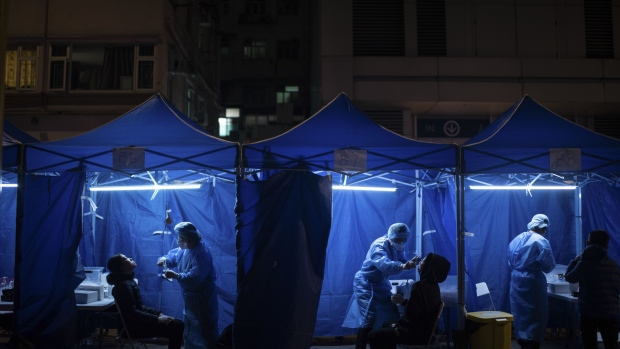 Health workers administer Covid-19 test outside a building placed under lockdown at the City Garden housing estate in the North Point district in Hong Kong, China, on Thursday, Jan. 6, 2022. Hong Kong is imposing strict new virus controlmeasuresfor the first time in almost a year as the highly transmissible omicron variant seeps into the community and threatens to spur a winter wave. , Bloomberg

(Bloomberg) -- A rising number of Covid infections in Hong Kong, known for its zealous Covid Zero approach, is unnerving the city’s political and health care leaders.

Local cases, while comparatively low, are hitting levels not seen in nearly a year. There are several undetectable chains of transmission. Some infections appear to be coming from unusual sources -- including family pets, a scavenger who recycles items from apartment buildings and glancing contact as masked people walk past each other in the subway -- showing how difficult it will be to keep the highly transmissible strains at bay.

It’s been more than three weeks since there were no local cases and daily counts are growing. After just three local infections last Friday, there were 10 on Thursday -- plus another 20 preliminary positive tests, with most transmitted locally. The outbreak in a public housing estate and signs of virus found in sewage led to mass testing at dozens of apartment blocks, involving thousands of people.

The city’s top virus expert warned one set of infections tied to hamsters may contain a novel mutation, justifying an urgent effort to contain it that includes the culling of thousands of pets.

“Faced with these multiple unknowns, if the community spread of the mutated virus is not stopped soon, it could spread across Hong Kong, the mainland and overseas, leading to another disaster,” said Yuen Kwok-Yung, a world-renowned microbiologist who advises the government.

Officials ordered residents at a public housing building in the New Territories into three days of restrictions. More than 2,500 residents need to undergo daily Covid-19 testing and can only leave the building after getting a negative result.

The lockdown order came after 13 preliminary cases emerged within one day at the estate, in addition to three confirmed omicron infections. Those involved are 15 residents and a guard, who likely spread the virus more widely into common areas like elevators while on patrol.

The affected residents live in 12 units, across 11 floors and facing 10 different directions, the government said, offering no plausible sign of environmental spread. The authorities now suspect a man who was infected visited numerous trash collection areas to gather items to recycle or resell, creating a potential super spreader event that seeded the virus throughout the building.

Ordering three consecutive nights of a snap lockdown is a compromise to the government’s typical approach, which is to send everyone considered a close-contact or high-risk to city-run quarantine facilities. Those locations couldn’t handle a sudden influx of thousands of people, health leaders said.

Health workers also found more cases related to pet shops, after the government ordered 2,000 animals to be destroyed based on the suspicion that imported hamsters could be a source of the latest flare-up of the delta infection. Two more customers tested positive for Covid after visiting different pet shops, and another sample from a hamster cage generated a positive result in yet another location.

Officials said they were more confident about the possibility that pet hamsters are spreading the virus in the city as the newly uncovered infections were genetically distinct from the strain initially found in a pet shop clerk.

More concerning is the virus strain spreading in the pet shop cluster is potentially a newly adapted one, with a novel mutation known as D427G, Yuen said in a press release late Thursday evening explaining the need to cull the animals.

“We are not yet sure whether the mutant virus was generated in hamsters and then transmitted to humans, or whether it was generated in humans,” he said. “We do not know the transmissibility or virulence of this mutant. The safest way is to sacrifice the hamster to stop the outbreak of the delta virus strain, which may come from the hamster. We have good reason to believe that animal-to-human transmission is very likely, and pet stores have seen second-generation transmission.”

The government is drilling down deeply, trying to track every case. The effort includes a report about one person who may have contracted the virus when passing someone who was infected in a subway tunnel for nine seconds. Both were wearing masks and they were walking in opposite directions.

After sewage samples gathered from multiple districts where untraceable cases were found tested positive for Covid, authorities said they were concerned that hidden transmission may be underway. Residents in dozens of buildings were urged to get tested.