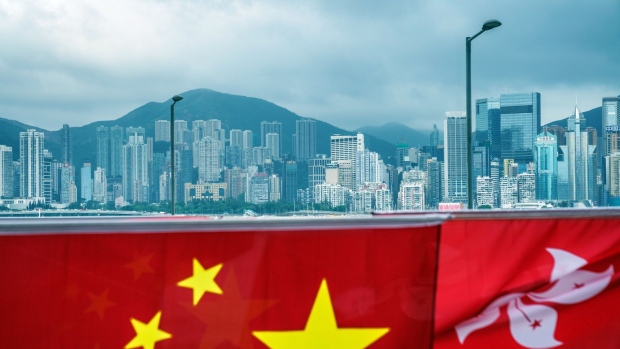 The flags of China, left, and the Hong Kong Special Administrative Region (HKSAR) against the city's skyline ahead of the anniversary of Hong Kong's return to Chinese in Hong Kong, China, on Wednesday, June 30, 2021. The national security law China imposed on Hong Kong a year ago today was much more than a piece of legislation: It showed Beijing was now running the show in the former British colony. Photographer: Lam Yik/Bloomberg , Bloomberg

“I know some of us may be very concerned,” Secretary for Justice Teresa Cheung told news conference Tuesday, according to the South China Morning Post and other local media. “But I think we shouldn’t be too worried for now.”

China’s top legislative body could move as soon as this month to add the anti-sanctions legislation -- a measure devised by Beijing to hit back at the U.S. and other critics of its human rights record -- to Hong Kong’s charter. The National People’s Congress Standing Committee plans to meet Aug. 17-20 to consider formally designating that some national measures apply in Hong Kong, and local media reported last week that the sanctions law was expected to be on the agenda.

The move follows the NPC’s passage of the anti-sanctions law in June, asserting broad powers to seize assets from entities that formulate or implement sanctions against the country. The U.S. flagged the possibility that China could apply the anti-sanctions law in Hong Kong when President Joe Biden’s administration warned businesses about the growing risks of operating in the city.

On Tuesday, Cheng said the new law would only be used to counter unreasonable sanctions imposed on the city by foreign governments. Since last year, the NPC Standing Committee has added provisions to the city’s charter effectively ending open elections and creating a new class of national security crimes subject to sentences as long as life in prison.

Cheng, who is one of several Hong Kong officials sanctioned by the U.S. over the implementation of the security law, defended the central government’s right to amend Hong Kong law.