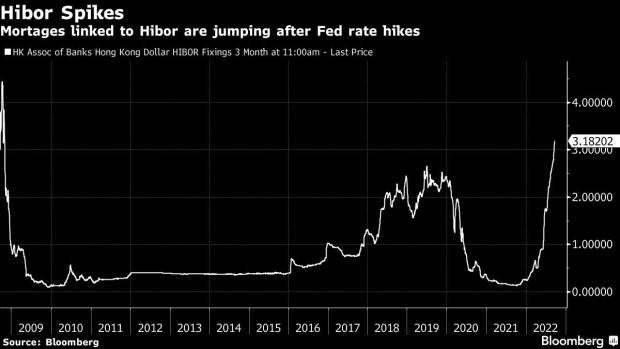 Residential buildings in the Kowloon area in Hong Kong, China, on Thursday, Nov. 4, 2021. With limited space to build, Hong Kong has gained a reputation for having some of the smallest and most expensive apartments anywhere in the world. , Bloomberg

(Bloomberg) -- Almost all homebuyers in the world’s least affordable housing market are tied to a floating interest rate, making the city’s property market among the most vulnerable to tightening monetary policies.

Nearly 97% of mortgages in Hong Kong are tied to Hibor, the city’s benchmark interbank rate, according to July data for new loans by the Hong Kong Monetary Authority. This is likely one of the highest in the world, and compares with nearly 17% in the UK and more than 70% in Japan.

The financial hub has been forced to hike rates five times this year, moving in lockstep with the US Federal Reserve as the Hong Kong dollar is pegged to the greenback. That has caused the three-month Hibor to climb to the highest since 2008.

The rate hikes could make Hong Kong’s housing the least affordable in 24 years, according to Bloomberg Intelligence analysts Patrick Wong and Francis Chan.

A potential increase in HSBC’s prime lending rate could further lift mortgage rates to over 3%, the highest since 2008, and reduce home prices in 4Q and even 2023.

While Hong Kong’s homebuyers with a Hibor-linked plan are protected by a price cap, banks have increased it recently. HSBC Holdings Plc boosted its prime rate by 12.5 basis points to 5.125% on Thursday.

That means that for a typical 30-year loan of HK$5 million ($640,000), the monthly repayment will now be HK$20,745, 1.6% more than before the bank’s hike, according to mortgage consultant mReferral Mortgage Brokerage Services. This comes after buyers already pay higher amounts alongside Hibor’s climb this year.

Hong Kong’s property market is in a downturn amid rising borrowing costs, an exodus of residents and a weakening economy. To give customers the option of repaying a fixed monthly amount, HSBC launched a new one-year, fixed-rate mortgage plan in August and analysts expect more banks to do the same.