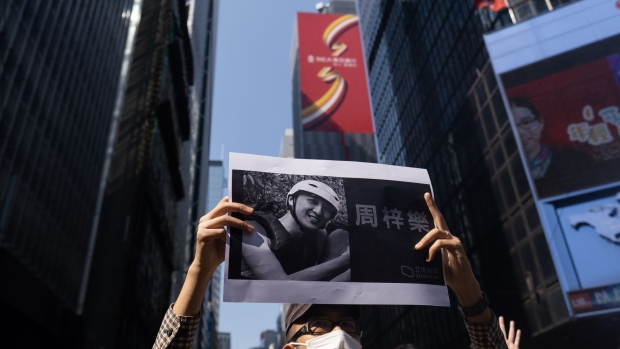 (Bloomberg) -- A Hong Kong police officer fired a warning shot on Friday in a clash with demonstrators as activists vandalized shops and petrol-bombed a police station in response to the death of a student during a protest this week.

Protesters set up barricades across roads in several districts, hurled hard objects at police officers and damaged shops and public utilities on Friday, police said in a statement. Some threw petrol bombs toward Tin Shui Wai Police Station, according to the statement.

On Monday, Chow Tsz-lok fell from a parking garage near a demonstration where police carried out a dispersal operation nearby using tear gas. Chow suffered a brain injury and a spokesman for the Hospital Authority confirmed Friday that he was certified dead at 8:09 a.m.

While some demonstrators have committed suicide during the prolonged period of protests, nobody has been confirmed dead as a direct result of a clash between police and demonstrators. Anger over police tactics -- and injured protesters -- has been a major focus of recent rallies.

“Considering it’s the first death that’s happened at a police-people confrontation scene, it will certainly add fuel to the already strong fire of anger -- particularly when people generally have absolutely no trust in the system, and the police,” said Alvin Yeung, a pro-democracy lawmaker.

Hong Kong police officials again denied their officers had chased and pushed Chow, emphasizing during a Friday afternoon press conference that he had been seen walking around the car park alone in CCTV footage. Police officers entered the car park twice that night, once during a patrol before Chow entered, and the second time after firemen were already attending to him, said Suzette Foo, the force’s Senior Superintendent of the Kowloon East region.

She called for a coroner’s inquiry into his death.

Protesters held a memorial for Chow before a lunchtime rally in the city center Friday, and calls for “flash mob”-style demonstrations marking his death were trending on online protester forums. On Friday night, demonstrators gathered in at least eight districts.

“We are very sad about the incident, we do not know what’s the next step,” said a 31-year-old bank employee who asked to be identified by the surname Tam as she protested in centrally located Chater Garden. She said the midday rally was about showing that Hong Kong people “have not let go” of grievances that have fueled months of protest.

Chow, 22, was a second-year computer science undergraduate at Hong Kong University of Science and Technology, according to the South China Morning Post newspaper, which reported the death earlier Friday. University President Wei Shyy briefly paused the school’s graduation ceremony to announce Chow’s death and observe a moment of silence.

The death comes after five months of historic unrest in the region’s main financial hub. Sparked by a since-withdrawn bill that would have allowed extraditions to mainland China, the protest movement expanded to include calls for greater democracy, morphing into the biggest challenge to Beijing’s rule over the former colony since its return to China in 1997.

Hong Kong’s government said it was “deeply saddened” and offered condolences to Chow’s family in a statement responding to media inquiries about his death.

Police approved a memorial on Saturday evening near the government headquarters for Chow. Prominent activist Joshua Wong mourned Chow’s death and called him a “freedom fighter.”

“Today we mourn the loss of the freedom fighter in HK. We will not leave anyone behind - what we start together, we finish together. Given the losses suffered by HK society in the past month, the gov must pay the price,” he tweeted.

The death comes amid a week of violence that saw an outspoken politician stabbed while campaigning, raising concerns about whether the city will be able to hold upcoming district council elections. The lawmaker, Junius Ho -- known for his inflammatory comments against protesters and pro-democracy politicians -- suffered only minor injuries.

On Thursday, the government’s Electoral Affairs Commission issued an appeal for the “public to keep calm and return to rationality” ahead of the vote, currently scheduled for Nov. 24. “The community is also urged to stop all threats and violence to support the holding of election in a peaceful and orderly manner,” it said.

Hong Kong police arrested opposition lawmakers Au Nok-hin, Raymond Chan, Eddie Chu and Lam Cheuk-ting later on Friday, Now TV reported. Chu said on his Facebook page that he was arrested for breaching the Legislative Council ordinance at an extradition bill committee meeting on May 11; the arrest of the others could not be immediately confirmed.

To contact the editors responsible for this story: Brendan Scott at bscott66@bloomberg.net, ;Daniel Ten Kate at dtenkate@bloomberg.net, Stanley James