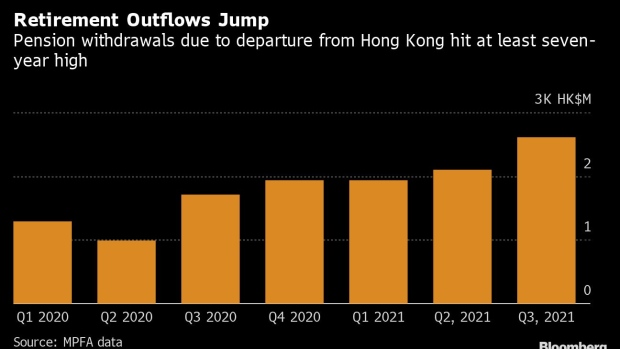 (Bloomberg) -- Outflows from Hong Kong’s mandated retirement plan from people leaving the city hit the highest in at least seven years in the three months through September as strict quarantine measures and China’s tightening grip are fueling departures from the financial hub.

A report released on Thursday from the Mandatory Provident Fund Schemes Authority showed HK$2.6 billion ($334 million) was permanently pulled in the third quarter, up 24% from the previous quarter and the highest since at least 2014. The number of such withdrawal claims rose 16% to 9,300.

Hong Kong has seen a surge in departures from the city after China imposed a national security law in 2020. The financial hub’s strict quarantine policy, which places incoming travelers in quarantine for as long as three weeks, is also wearing on residents. A survey by Asia Securities Industry & Financial Markets Association found that almost three quarters of international firms are experiencing difficulties in attracting and retaining talent.

A spokesperson for the MPFA stressed that permanent withdrawals are not solely due to people emigrating, but also include people moving back home or to the Chinese mainland. The number of permanent departure claims has fluctuated in the past and members may have more than one account, the spokesperson said. The MPFA also said that due to investment returns and contribution inflows, the amount of withdrawal claims would also increase.

There were 24,000 applications for the British National (Overseas) in the third quarter compared with about 34,300 in the first three months of the year and about 30,600 in the second quarter, according to U.K. government data.