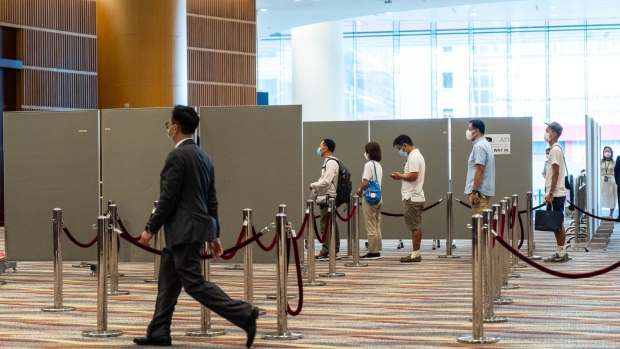 Police officers stand guard outside the Hong Kong Convention and Exhibition Center, one of the polling stations for the Election Committee Subsector Ordinary Elections, in Hong Kong, China, on Sunday, Sept. 19, 2021. The successor to Hong Kong's Chief Executive Carrie Lam will be chosen in 2022 by the newly reformed Election Committee, an elite group of just 1,500 people who represent business, interest groups and Chinas Communist Party. Photographer: Chan Long Hei/Bloomberg , Bloomberg

(Bloomberg) -- Hong Kong voters will be outnumbered by riot trained-police as an elite group elects the committee of Beijing loyalists that will next year pick the financial hub’s leader.

At least 6,000 police officers will be deployed as just 4,889 eligible voters from the corporate world and pro-government groups cast their ballots Sunday, Radio Television Hong Kong reported, underscoring political sensitivities around the poll.

Participation has been slashed from the last vote in 2016, when some 240,000 people cast ballots, and just 364 of the 1,500 seat are being contested. That’s down to a controversial Beijing-imposed overhaul of the city’s electoral system earlier this year to ensure only “patriots” can govern.

In March, China’s top legislative body expanded the Election Committee to include 300 additional Beijing loyalists, and created a vetting committee to pre-approve all candidates based on a national security checks. Winners of this election will now choose 40 of the 90 seats in the city’s Legislative Council.

The election overhaul came in the wake of often-violent protests against the government that rocked Hong Kong in 2019, with Chief Executive Carrie Lam’s administration seemingly losing control at times. Last June, Beijing imposed a national security law on the city that has been used to arrest more than 140 opposition figures and activists, and target several civil society organizations.

People’s Daily, a mouth piece for the central government, this week described the elections as being of “great significance.” Their smooth running will lay a solid foundation for the city’s economic development and ability to achieve good governance, it said.

“Our improved election system ensures ‘patriots administer Hong Kong’ and helps us to return to the original resolution of ‘One Country Two System,’” said Lam at a briefing in Hong Kong on Sunday. “Today’s event is of significant importance.”