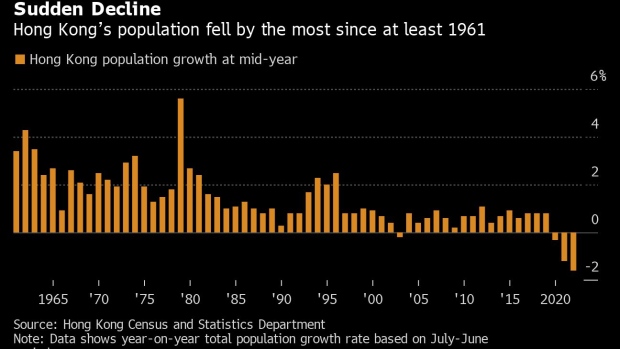 (Bloomberg) -- Hong Kong’s population dropped by a record as people fled strict Covid-19 restrictions that have hobbled the city as most other regions move on from the pandemic.

The city saw a decline of 121,500 residents in the year ended June 30, leaving the population at about 7.29 million, according to government data released Thursday. That means the population fell 1.6%, marking the third straight year of declines and the biggest drop in at least six decades. A wide-reaching national security law may have also been a contributing factor.

Amid the “continued impact of Covid-19, stringent border control and quarantine measures have been in place in Hong Kong, the Mainland and other places around the world, resulting in severe interruption of cross-boundary travel,” a government spokesperson said in a statement accompanying the data, adding that the inflow of people into Hong Kong has “remained at a low level.”

Hong Kong -- which saw its population swell in the post-war era amid waves of mass migration from the mainland -- has only seen a few instances of decline since 1961. The overall population shrank by 0.2% amid an outbreak of severe acute respiratory syndrome and protests against an earlier security law in the 2002-03 period, for instance.

However, recent declines have swelled amid the city’s tight pandemic controls.

Former Chief Executive Carrie Lam implemented some of the city’s stringent social distancing measures of the pandemic during the last year and threatened to mass test all residents, with anyone infected facing isolation in government camps. The mass testing plan never materialized, but people still fled the city as it enacted flight bans on countries including the US and the UK, and as fears that families could be separated in quarantine grew.

Hong Kong has since lifted many of its restrictions, but a three-day hotel quarantine requirement for arrivals still isolates the city from much of the world.

The city’s campaign against dissent following Beijing’s imposition of a security law in June 2020, which raised questions about the “one country, two systems” framework that underpins the former British colony’s financial center, could have also contributed to the population decline.

Hong Kong authorities have increasingly used a wide array of tools beyond the security law to restrict the rights of Hong Kongers. At least 30 individuals have been arrested for inciting or publishing seditious text or materials. Earlier this year, a court handed a 40-month prison sentence to the first person convicted under a colonial-era sedition law since the handover to China -- a sign authorities intend to dish out stiff punishments for critical speech as part of a broader political crackdown.

Some Hong Kong residents with foreign passports or those with overseas have sought to relocate recently -- especially to the UK, which opened up a pathway to citizenship for holders of British National (Overseas) passports.