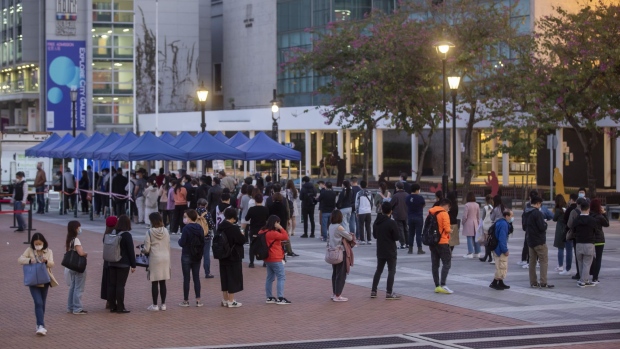 Residents queue for a Covid-19 test in the Central area of Hong Kong, China, on Friday, Jan. 7, 2022. Hong Kong's push to reimpose strict Covid-control measures suffered an embarrassing setback after it emerged that several government officials had gone to a large party attended by a person believed to have Covid. , Bloomberg

(Bloomberg) -- Hong Kong reported the highest daily tally of unlinked infections in its fifth Covid outbreak on Tuesday as the government struggles to contain community transmission.

The city had 129 newly confirmed cases in the 24-hour period ending on Tuesday at 9 a.m., health officials said. Of those, 102 were local cases and 22 have no currently known source, Chuang Shuk-kwan, head of the communicable disease branch of the Center for Health Protection said during a daily press conference. There were another 90 preliminary positive cases disclosed.

The increasing number of unlinked infections comes as residents gather to celebrate the Lunar New Year. A spike in cases often occur in the days and weeks following holidays, as people let down their guard to socialize.

“The large number of unlinked in the community still indicates there is quite some community transmission in those areas,” Chuang said.

David Hui, a respiratory disease expert disease expert advising the government on Covid, said it would take about two months to contain a wave of infections after daily cases hit high double-digits or triple digits, based on experience with previous waves, Radio Television Hong Kong reported.

Officials also said they are reviewing the standards used to determine when to release Covid patients from the hospital. Hong Kong currently uses a standard that’s much more rigorous than the rest of the world, leading some patients to remain in medical facilities for weeks even when they are exhibiting no signs of infections.

The city’s advisory group is reviewing the science around what the test results indicate and the government will follow their recommendations.